Economy: the 5 major trends to remember from 2021

The vigorous economic recovery was accompanied by strong collateral effects on the balance of power in world trade. A look back at the 5 major trends for 2021 that will continue into 2022.

Despite the continuing health crisis in 2021, vaccination coverage and improved treatments have enabled a rapid recovery for the economy. This very dynamic expansion phase, characterized by a “V-shaped” recovery, remains, however, regionally asymmetric. Conversely, the downside is a highly inflationary economic context owing to an economic machine that is close to overheating, with the aggravating factor of extreme tension in supply chains. 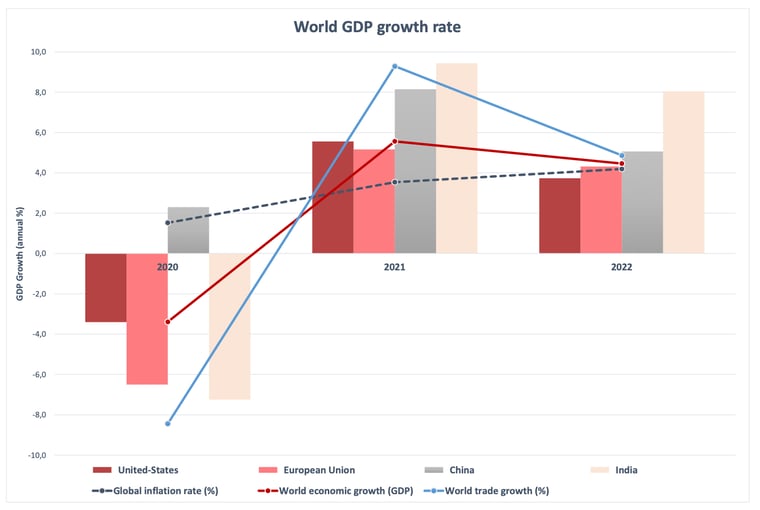 The global recovery is undeniable. The Organisation for Economic Co-operation and Development (OECD) estimates the rebound in global growth at 5.6% for 2021 and forecasts 4.5% for 2022. Global growth is therefore strong but uneven and dependent on the health measures taken, supportive public policies and sectoral strengths in each country.

The phase of strong economic expansion in 2021 resulted in the generalised inflation that we predicted back in March. The recovery in consumption in the United States and Europe, after the recessionary phase in 2020, surprised forecasters by its magnitude and suddenness. The consequence is high inflation due to a supply crisis.

Inflation measured by consumer prices should reach 3.5% globally for 2021 and 4.2% in 2022 according to the OECD. The United States is bearing the brunt of this inflationary surge with 3.9% for 2021. Europe has suffered less with 2.4%. There is a lower estimate for China (0.8%), but the country is facing shortages of raw materials and energy that is temporarily disrupting its economy.

The European Central Bank estimates that the peak in inflation will reach a high at the end of 2021 or during the 1st semester 2022, before a decline during the second part of the year. In any case, this inflationary surge will have an impact on the cost of credit, and central banks are likely to gradually raise their interest rates in 2022, as is already the case in the United Kingdom and Norway.

The price of energy was the main driver of inflation in 2021. The annual increase was 43% for crude Brent oil and 46% for natural gas. The “V-shaped” economic recovery partly justifies this price increase. The rise in prices was accompanied by a gradual reintroduction of crude oil production volumes, but this was at a slower pace than the increase in consumption.

After negative figures in 2020, growth in global trade of goods will reach 9.3% according to the OECD in 2021 and 10.8% according to the WTO. This reflects a sharp acceleration in demand for merchandise during 2021, correlated with the recovery in global consumption. This excess of demand relative to the available supply has had an upward impact on the price of raw materials as well as on the prices of transport and energy. It has also created significant bottlenecks in the supply chain.

The semiconductor shortage has crippled the automotive and technology sectors in particular. Automobile production has declined worldwide. The shortage of materials also severely limited activity in the construction sector.

China did not experience a recession in 2020 and has shown growth of 8.1% in 2021. With its export power, this country remains "the factory of the world", as shown by the figures for foreign trade with the major Western markets. In 2020, China took the place as the European Union's leading trading partner from the United States (in terms of imports and exports combined). A position that it strengthened in 2021. Looking at year-to-date figures at the end of October, EU exports to China increased by 12.9% and imports by 18.5% compared to the same period in 2020. As a result: the trade deficit between the EU and China is widening, going from -151.8 billion € over the first 10 months of 2020 to -189.2 billion € for the first 10 months of 2021.

In the United States, the trade deficit with China also increased by 13.7% for the first 10 months of the year, reaching -287 billion USD against -252 billion USD for the same period in 2020.

Europe and the United States are reacting with support plans to promote the relocation of means of production, but also for investments in infrastructure. The United States has adopted a $ 1.2 trillion plan to modernise infrastructure, while the European Union plans to mobilise up to $ 300 billion by 2027 as part of its “Global Gateway” plan.

The main movement on the foreign exchange market during the year 2021 is the fall of the euro against other currencies. The euro posted declines of 7.4% against the dollar, 10.2% against the yuan, 4.7% against the pound sterling, and 3.7% against the Swiss franc. This trend is explained by a normalisation of exchange rate parities, which are returning to their pre-pandemic equilibrium values. The “safe haven” aspect of the euro during the health crisis is fading as the major nations regain their cruising speed in terms of economic growth.

The second aspect weighing on the euro is that the European Central Bank continues to keep interest rates extremely low to facilitate growth. In this way, the money invested has a better return in the United States or the United Kingdom because the interest rates are higher, which supports the other currencies against the euro. This movement is likely to continue in the first half of 2022 and should support European exporting companies.

Global economic growth is expected to maintain a strong pace in 2022, but it is likely to stabilise in the year 2023. Inflation remains the big unknown and it seems difficult to curb it before the second half of 2022. The pace of economic growth will be correlated with the evolution of the pandemic and the improvement of fluidity in the supply chain. The sectors that could benefit the most from standardisation are aeronautics, automotive, tourism and renewable energy producers.