Oil prices at an all-time low: good news for transport and logistics?

Oil prices are plunging and even to the point of crossing the threshold of a negative value: this situation seemed impossible only a few days ago, but briefly became reality, thus testifying to the serious economic crisis linked to the Covid-19 epidemic. It remains to be seen whether the decline is sustainable, and whether it is, in fact, good news for transport and logistics.

On April 20th, 2020, the improbable happened, with a drop of -302% in a single day of the benchmark processed crude oil futures contract in the United States. The WTI (West Texas Intermediate) quotes fell into negative prices at $ -37 / barrel for the last trading day for May deliveries. A historic first but with a low volume of transactions (only 17% on this deadline), and so is due more to technical mechanism than a systemic symptom.

In comparison, the benchmark product for Europe, the Brent Crude rate for North Sea oil, had fallen by only 12% during the day of April 20th, reaching a price at the end of trading of $17.36 / barrel. This situation highlights an operational logistics factor. Brent is a futures contract whose financial transaction is completed in cash, whereas for WTI, it is necessary to physically deliver barrels of oil. The problem then results in a phenomenon of saturation of oil storage capacity in the USA, linked also to an under-investment in storage infrastructures in recent years. Tankers are even being used to store oil offshore and their rental prices have doubled in the past month. As a result: players who cannot store oil are forced to resell their contracts, regardless of the price!

The fact remains that the price of a barrel has reached historic abysses with a selling price of less than $ 20 per barrel. The entire oil production sector is at risk, as the price for crude oil is at its lowest level in 20 years. Consumption is in free fall, with the coronavirus crisis disrupting the world's economy by halting economic activity.

The impact of lockdown measures in 187 countries has led to a near halt in transport and the mobility of populations. Traffic has collapsed for all modes. Kerosene, road diesel, marine fuel (particularly Low Sulfur following the introduction of the IMO 2020 regulations): demand is desperately sluggish on all oil market segments, which are determined by their degree of refining.

Moreover, this health crisis is also highlighting the strategic nature of the Supply Chain. The risk of supply dependency reinforces the increased need for logistical storage. It is possible that a paradigm shift is to be expected, including a rebalancing between the notion of flow and the notion of stocking. 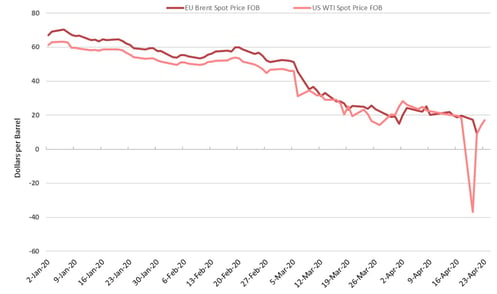 A boon for transportation?

On the face of it, lower oil prices are a boon for industrial sectors and fuel-consuming countries, such as those in Europe, and in particular for the transport and logistics sector. However, regardless of the type of fuel produced, the fall in prices is not fully passed on.

To stem the decline in oil prices, OPEC oil-producing countries, grouped into a cartel since 1961, generally use a simple mechanism: they agree to reduce their production. However, a geopolitical event has upset the balance: since 2019, the United States has become a net exporter of fossil fuels by massively producing shale oil.

In March 2020, Russia, which is now integrated into OPEC +, refused a further reduction in production, arguing that the production of US oil was continuing at high levels since this country is not part of the OPEC cartel. In an unexpected move, Saudi Arabia then sharply increased its oil production, leading to a significant drop in world prices. This increase was sustainable, since Saudi Arabia has gigantic reserves and an average cost of production among the lowest in the world (close to $ 2.80, as revealed by the IPO of Aramco). On the other hand, in this situation, the exploitation of US shale oil, whose cost is somewhere between $ 38 to $ 44, was no longer profitable.

In mid-April, the OPEC and other major producing countries including Russia and the US, totaling 23 countries, finally reached an agreement. In it they committed to a historic reduction in production over a 2-year period. This reduction will amount to 9.7 million barrels / day from May 2020 and will then gradually decrease to 5.8 million barrels / day in 2022.

The issue is of strategic national importance for many oil-producing countries, because very often the balance of their national budgets depends on this activity. For example, according to studies made by the IMF, the equilibrium price of oil for the national budget is $ 104 for Algeria, $ 144 for Nigeria and $ 244 for Iran. This suggests complex trade-offs on state budget spending and the level of national debt. The equilibrium oil price for Saudi Arabia is $ 82, but the economy is already engaged in a process of diversification and in-depth transformation with its salutary plan "vision 2030". In any case, this crisis also carries geopolitical risks which the supply chain industry must take into account.

In the United States, in the medium term, the entire small producer sector is in danger because the cost of production is greater than the selling price. Today, some are already selling oil at $ 2 a barrel to avoid having to go through the long, dangerous, and costly process of shutting down their production wells. If the price of a barrel remains below $ 20, more than 500 companies could go bankrupt in the USA by the end of 2021 and at $ 10 a barrel, this could increase to 1,100 companies (source Rystad Energy).

An opportunity for those with storage capacity

As we can see, the oil-producing countries have no other choice than to do everything they can to stem the fall. The reduction in production could however be insufficient, as the market remains in danger of a historic collapse. Energy Information Administration (EIA) analysts expected a record drop in global demand of 29.3 million barrels / day for April. A figure which corresponds to a contraction of 30% in world consumption, a level equivalent to that of 1995.

This drop in oil prices is a good opportunity to adjust stocks and build strategic oil reserves. The United States has in the past demonstrated its expertise in this area, by building up reserves which it regularly adjusts according to market conditions. Investing in new oil storage capacity in order to benefit from current low levels in price makes perfect sense at the moment. It is also in the interest of large companies to look at this opportunity. Analyzing its need for oil over a year, adjusting its stocks and buying financial protection against a potential rise in prices would protect its productive apparatus against the volatility of oil prices.

In this context of low oil prices, will energy transition ultimately be the big loser during the crisis? In the short term, it is likely. It seems obvious that investing in renewable energies is less relevant in the current environment. Airbus for example, renowned for its fuel-efficient aircraft, plans to reduce its production of airliners by 30% in the face of cancelled orders. It is easy to imagine that priority business investments, along with political concerns, will focus on economic recovery. However, some countries, such as France, believe that the crisis should on the contrary reinforce energy transition. Indeed, this is a long-term process that is already underway at an international level. Governments, which are shoring up businesses at the moment, have the means to negotiate for commitment and investments in a productive tool that limits polluting emissions.

On the other hand, at the corporate level, the best way to protect against a commodity's price volatility is to diversify its sources of supply. In the case of oil, one can anticipate changes in the regulatory framework by investing in a fleet running on gas, which generates less greenhouse gases. In this way, for part of its fleet, a company could take advantage of the disassociation of oil and gas prices in a phase of high market price volatility.

With the oil market being organized as a cartel, very few players have the capability to produce and deliver oil under $ 20 per barrel. It is therefore unlikely that prices will remain this low over the long term as economic activity will stimulate demand. The risks are therefore multiplied: first a stabilization of oil prices above the equilibrium price, then an increase in taxes on imported oil, then a disassociation of gas and oil prices which could even lead to a reorganization of the gas market within a new "OPEC of gas producing countries".