Spain: a key player in the European economy

SPECIAL FEATURE 1/5 - Historically and geographically on the margins of Europe, Spain is now one of the main European markets. The transport and logistics sector is a major player in the Spanish economy, we have therefore decided to devote a series of articles to this sector. We start this week with an economic panorama.

According to World Bank figures, Spain's GDP reached USD 1,281 billion in 2020. Spain ranks 14th in the world and 5th in Europe, after Germany, the United Kingdom, France and Italy. The population is estimated at 47.3 million inhabitants[1], which places Spain also in 5th place on the Old Continent.

In terms of GDP per capita, measured considering purchasing power parity (PPP), an indicator used by economists when making international comparisons, the situation in Spain is closer to that of its neighbours with 37,766 USD in 2020. By way of comparison, this indicator was 46,983 USD in France.

Spain was severely affected by the civil war (1936-1939) and experienced a period of economic self-reliance for some 20 years. The process of opening up, which began in the late 1950s, then led to a long period of economic expansion and improved living conditions for the population. This dynamic was crowned by its entry into the European Union on 1 January 1986 and into the euro zone since its creation in 1999.

Economic performance makes Spain a notable case of a country taking off economically. According to the Maddison Project Database of the University of Groningen[2], which is an authoritative source of data on long-term growth in the world, its GDP per capita in volume increased more than sixfold between 1958 and 2018 while the population grew by 58%.

The structure of the economy has been modernised and new sectors have been created or strengthened in industry (food, motor vehicles, railway construction, chemicals, etc.) and services (tourism, trade, transport, etc.). Spanish agriculture is today particularly competitive in fruit and vegetables.

One of the particularities of the Spanish economy lies in the efforts made by successive governments, regardless of the political party in power, to support industry. This strategy has been endorsed by all the relevant stakeholders, mainly local authorities (regions and municipalities) and trade unions. The Spanish automotive industry, that was characterised by the presence of exclusively foreign manufacturers, including the Renault and Stellantis groups, perfectly illustrates this commitment. With 2 million vehicles assembled in 2021, Spain ranks 2nd in Europe after Germany[3]. The automotive industry (car and equipment manufacturers) accounts for 8% of Spanish GDP and more than 80% of production is exported[4].

The weaknesses of the Spanish economy should not be masked by these positive developments, weaknesses that are regularly highlighted by international experts, including those of the IMF and the OECD. Spain is characterised by a traditionally higher unemployment rate than its European neighbours (14.1% in 2019, before the outbreak of the Covid-19 pandemic), and this is particularly the case for the younger generation. The country also suffers from a heavy dependence on imports to meet its energy needs.

But the main weaknesses concern the productive fabric, characterised by a strong fragmentation, a lack of productivity and a lack of innovation. Spain spends only 1.3% of its GDP on research and development (R&D), compared with 2.2% in France, 3.2% in Germany and Japan, according to OECD statistics.

An economy hard hit by the pandemic

These weaknesses place the Spanish economy in a fragile position in the event of an “external shock”. The Covid-19 pandemic has had a strong impact on Spain and has had a very negative impact on the economy. In 2020, its GDP fell by 10.8% in volume, the largest decline in Europe, with the EU's overall GDP falling by 5.9%. The first estimate for the year 2021 shows an increase in the Spanish GDP of 5%, which will not compensate for lost ground[5] 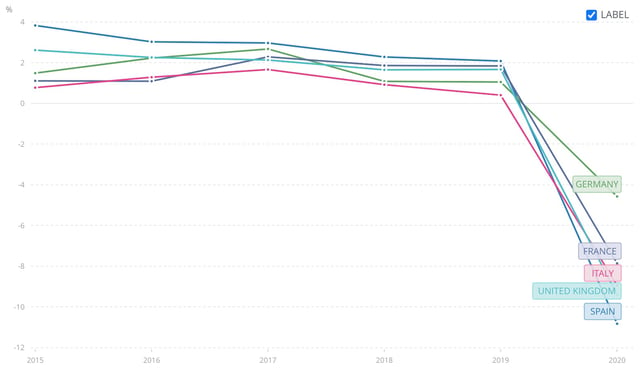 Spain is counting on the support provided by Europe under the Next Generation EU programme with a planned envelope of €140 billion (grants and loans) over the period 2021-2026.

The strength of foreign trade 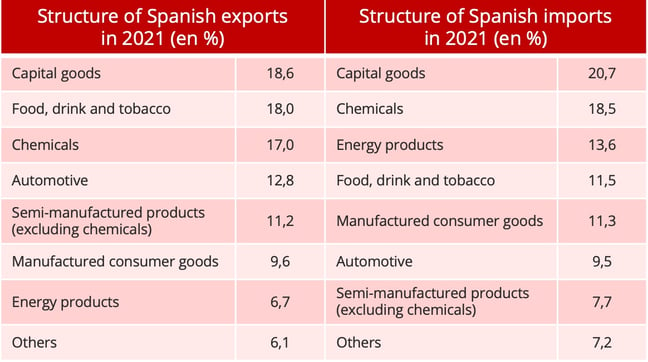 Spanish foreign trade is characterised by the influence of Europe, which concentrates 74% of exports and 60% of imports. For historical, linguistic and cultural reasons, Latin America is also an essential partner (5% of exports and imports) but the real challenges in trade lie elsewhere. In 2021, France absorbed 16% of Spanish exports, three times more than the whole of Latin America.

The main handicap, from a geographical point of view, lies in the low impact on the most dynamic area of the world economy, Asia (9% of exports in 2021 against 16% for France). However, we can see that China is interested in the Spanish market, in particular through cross-border e-commerce, which will be the subject of a future article as part of this collection. 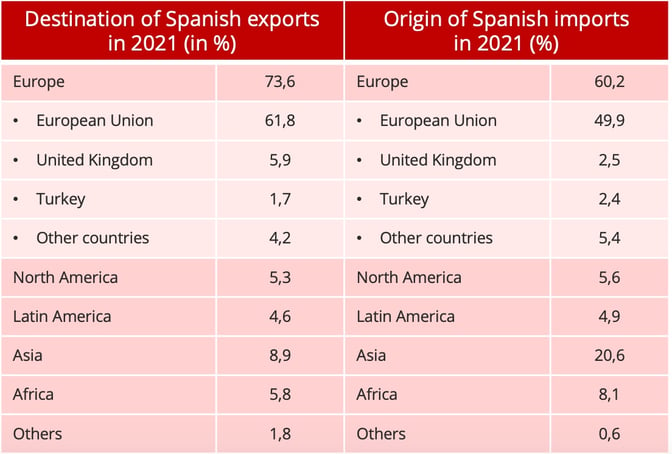 Transport and logistics: a specific place in Europe

Foreign trade, as well as the characteristics of its economy and its geographical position, in turn explain the particularity of Spain's situation in terms of transport and logistics. Spain has the largest coastline in Europe (8,000 kilometres). 90% of exports and 60% of imports are made by sea, hence the importance of commercial ports (46 grouped in 28 port authorities). Spain's location in the Mediterranean on the Euro-Asian maritime axis, via the Suez Canal and the Strait of Gibraltar, has favoured the development of transhipment activity, mainly in the ports of Algeciras and Valencia. Spain ranks 1st in Europe for container traffic with nearly 18 M TEUs in 2021, including 9.4 M TEUs for transhipment[10].


Daniel Solano is an economic journalist. Based in Spain, he covers international trade and transport issues.
See all its articles