Rail freight accounts for less than 5% of land freight transport in Spain. As part of the post-Covid recovery plan and the transport decarbonisation strategy, the Spanish government has opted for a different strategy to promote rail freight and modal shift.

In the rail freight transport sector in Spain, the most important development has been the liberalisation decided at an EU level. The entry into force of the Railway Sector Act (LSF), on 1st January 2005, allowed the market to be opened up to competition. The incumbent, Renfe, lost its monopoly and was split into two entities: Renfe Operadora, a public company dedicated to the transport of passengers and goods; and ADIF (Rail Infrastructure Administrator), a public company responsible for the construction and maintenance of lines and stations as well as traffic management. ADIF is also responsible for assigning train paths to companies, i.e. traffic authorisations.

Over the years, private operators have made a real breakthrough in the market. In 2021, according to ADIF statistics, they held a 41% share of the market measured in train-kilometres (compared to 38% in 2020), the balance going to Renfe Mercancías, the dedicated subsidiary of the incumbent operator. The proportion is substantially similar in terms of net tonne-kilometres.

Regarding turnover, the 2013-2020 evolution shows a continuous increase of private companies, which obtained a market share of 35% in 2020 against 17% in 2013, while that of Renfe Mercancias decreased over the same period from 83% to 65%. 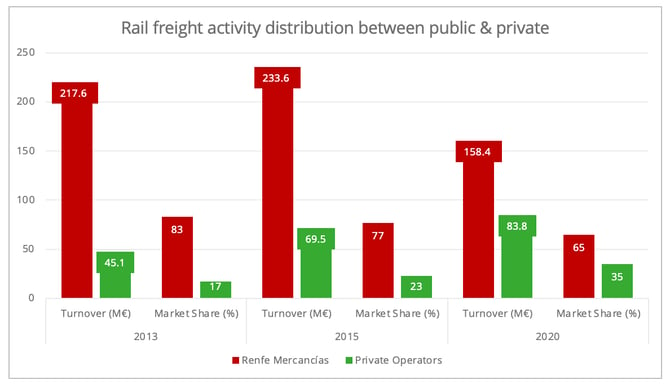 This breakthrough is mainly due to the positioning of the private sector in the intermodal traffic segment (mainly containers and swap bodies), which has become predominant in Spain. Alternative operators have been particularly active in traffic to and from commercial ports, which currently accounts for more than half of total rail freight in Spain measured in tonnage (compared to 40% in 2016). This phenomenon has intensified with the arrival of the major shipping companies as part of the so-called "door-to-door" strategies. These firms control their own railway companies (Medway for MSC, Continental Rail for CMA CGM, Logitren for Cosco, and Go Transport for Maersk).

However, this "rail-port" traffic is highly concentrated. According to a study by the Spanish National Commission for Markets and Competition (CNMC), the Barcelona / Valencia / Bilbao trio accounted for 56% of freight in 2018. If we add four other ports, namely Gijón, A Coruña, Santander and Tarragona, we reach a figure of 90%. The main traffic corridors are the Barcelona-Saragossa and Valencia-Madrid routes, each in both directions.

A marginal mode of transport

While private operators have succeeded in gaining a large market share, liberalisation has not been sufficient to initiate a phase of development in overall rail freight traffic in Spain:

Under these conditions, and due to the absence of inland waterway transport in Spain, the truck occupies a predominant place in the inland transport of goods (96.4%), which is an obvious source of concern in the context of the fight against climate change.

The decline in rail freight should not lead us to imagine that the Spanish authorities have shown absolute passivity. For more than two decades, successive governments have affirmed and reaffirmed the “priority” nature of rail freight transport. "Stimulus plans" followed one after another, but without succeeding in stopping the decline.

However, the Covid-19 pandemic and the ensuing economic crisis have brought about a series of changes. The Spanish government's economic recovery plan is based on a clear commitment to accelerate decarbonisation.

The "2030 Strategy for Safe, Sustainable and Connected Mobility", approved by the Council of Ministers on 10 December 2021, includes the 'Goods 30' plan, designed to relaunch rail freight transport. Its main objective is to increase the share of rail in land freight transport to 10% by 2030. The proposed actions represent an amount of €8.4 billion.

There is a real change of approach on the part of MITMA. It is no longer a question of presenting yet another "plan", endowed with billions of euros and focused mainly on the development of infrastructures. Admittedly, these have not been abandoned, but this time attention is paid to the provision of service, proposing concrete measures to promote the modal shift from road to rail (...)

Please fill in the form below to access the full version of this article in Pdf:


Daniel Solano is an economic journalist. Based in Spain, he covers international trade and transport issues.
See all its articles

The economic and operating environment in 2021 was clearly beneficial to the global leaders in the transport and logistics sector, which increased their revenues and, particularly, their profitability. These results demonstrate a real reversal of the balance of power between shippers and service pro...
Anne Kerriou
4 min
Abonnés

Container transport: prices and volumes down

BAROMETER. FAK rates have fallen below the psychological bar of 5 digits for imports from Asia to Northern Europe for some shipping companies. At the same time, aggressive blank sailings are continuing to be used by companies, much to the discontent of shippers. June marked a shift from 5-digit to 4...
Jérôme de Ricqlès
2 min
Abonnés

BAROMETER. With a further 0.8% increase in June according to the Upply Freight Index, road transport prices in France are soaring higher and higher, boosted by diesel prices. But inflation and the downward trend in purchasing power are worsening the economic situation. The war in Ukraine has now bee...
William Béguerie
2 min