The rebound in the global economy creates strong tensions

It is likely to be several months before the global supply chain can emerge from the area of turbulence it entered into in 2021 due to the explosion in demand.

After the 3.2% decline in GDP recorded in 2020, according to figures from the International Monetary Fund (IMF), the world economy benefited from a rebound phenomenon during the 1st semester of 2021. This acceleration is driven by a sharp increase in consumption, both in Europe and in the United States. The IMF anticipates a global growth of 6% for the year 2021, with it being faster for emerging and developing countries (+ 6.3%) than for advanced economies (+ 5.6%).

According to OECD data, in the second quarter of 2021, the GDP of the United States increased by 1.6% compared to the previous quarter and that of China by 1.3%. In Europe, there is a more marked acceleration for the countries in the South. Spain posted a growth of 2.8% and Italy 2.7%, while Germany stood at 1.6% and France at 1.1%. The United Kingdom, on the other hand, is entering a post-Brexit “unlocking” phase and took full advantage of the lifting of health restrictions in the second quarter with a 4.8% growth in its GDP compared to the first quarter.

The European economy remains marked by an acceleration in activity. The European Central Bank has raised its growth estimate to 5% for the year 2021 and estimates that pre-crisis levels will be reached by the end of the 4th quarter. 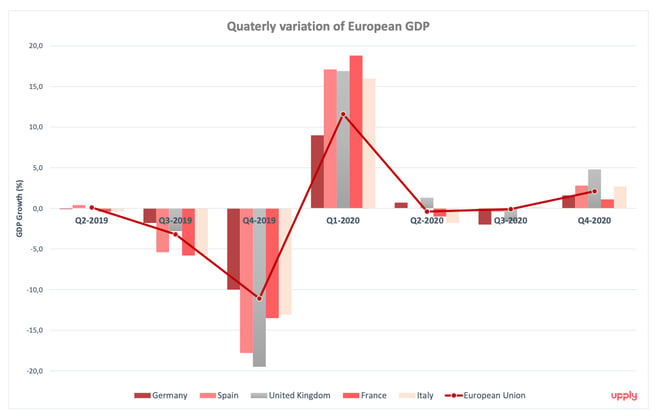 Trade in merchandise in terms of value also climbed to a new record in the 2nd quarter for the G20 countries. Data collected by the OECD shows that exports amounted to $ 4,213 billion, up 4.1% from the previous quarter. Imports increased by 6.4%, reaching a record figure of 4,252 billion (data measured in current dollars and adjusted for seasonal variations). The World Trade Organization (WTO) barometer confirms this vigorous recovery in merchandise trade and also posts a record since its inception.

If the economic recovery partly explains these good results, the increase in the price of raw materials is also an essential explanatory factor. For example, Australian exports increased by 10%, benefiting from higher prices for sales of metals, coal and grains. Likewise, Brazil's exports rose 29.6% thanks to iron ore and soybeans. Another example: the growth in energy prices has been a contributing factor to the 30.7% increase in Russian exports.

The improvement in the economic outlook will be supported by an 11.4% increase in global trade of goods for the year 2021, according to the estimates of the French General Directorate of the Treasury, but will have as a corollary an increase in inflationary trends.

Hyperinflation of primary and strategic products

A “V” shaped economic recovery could generate a certain level of inflation. On the other hand, it is necessary to be vigilant if the rise in prices is the consequence of the increase in the cost of skilled labor, energy and raw materials. At the moment, the exponential increase in the prices of sea and air freight transport adds to the cost of production and could become a factor of acceleration of inflation in the selling prices to consumers.

At a European level, the European Central Bank aims to limit inflation to 2%, but that seems to be difficult to sustain this year. In August, consumer prices rose 3% in the euro area. This increase can be explained by a catching up in consumption, the rise in oil prices and the adjustment of VAT in Germany. A country that has been particularly affected since German inflation reached 3.9% in August, its highest level for 27 years. Faced with the principle of reality, the European Central Bank has reassessed its inflation estimates to 2.2% for 2021 but considers that this phenomenon is temporary and that inflation will fall to 1.7% in 2022.

European Union industrial producer prices increased by 12.2% in July 2021 compared to July 2020. The situation is similar in the United States, where producer prices for manufactured products and services rose by 8.3% in August 2021 compared to August 2020, a 10-year record. The health crisis has disrupted production units and supply chains, causing shortages of materials, semiconductors and spare parts. Raw materials and petroleum products have been hit hard by this surge in prices. According to spot prices traded on the New York, London and Paris stock exchanges, crude oil (WTI) has increased by 87% over the past 12 months, aluminium by 59%, soybeans by 27.5% and coffee by 42%.

In terms of transport, Upply's data reveal a surge in transaction prices for maritime container transport of 189% on the Asia-North America West Coast corridor over the period between August 2020 and August 2021. The international air freight sector is also trending upwards with an increase of 27% on the Asia-Europe corridor for the same period. The increase is less marked for the road sector, but the market faces an under-capacity of means of transport, a critical shortage of drivers, and an increase in the cost of labour. 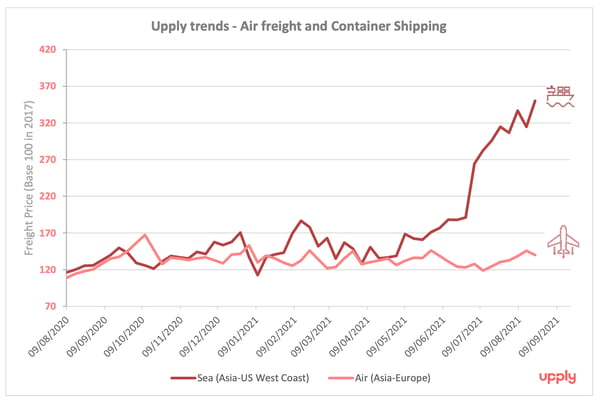 Since the easing of health restrictions, the private sector activity in the euro area, as measured by the composite PMI index, has grown at a steady pace. After hitting 60.2 in July and 59 in August, the PMI stabilised at its highest level for fifteen years. But this meteoric growth has resulted in strong pressure on supply chains and a record increase in delivery times and stockouts.

Beyond the price effect, the shortage of semiconductors led to the shutdown for several weeks of certain factories, in particular in the automotive sector. New car registrations in France fell by 15% in August 2021 compared to August 2020 and those in Germany by 23%. The same is also true for the world's largest market, that of China, where sales of new cars fell by 14.7%. A shortfall that cannot be made up for in the last quarter. Toyota announced at the beginning of September a 40% drop in its level of production and reduced its annual production target by 300,000 vehicles due to the shortage of chips and spare parts.

Tensions in maritime transport have also caused delivery delays for several months and historic stockouts for the distribution sector. Record congestion at ports on the West Coast of the United States, desynchronisation of services, critical shortage of available empty containers in Asia and Europe, port terminal closures in China due to Covid cases: the problems are mounting. Being confronted by a situation as complicated as that facing containerised transport, Ikea followed the lead of Home Depot and Walmart by announcing in early September that it would be purchasing containers and chartering dedicated ships to ensure the supply of its stores. In addition to shippers, several major global freight forwarders have also chartered vessels.

In the United Kingdom, it is the shortage of truck drivers that is weighing on the economy. Under the effect of Brexit and the health crisis, the absence of foreign drivers is being felt, this penalizes logistics chains to the point of stockoutages. For example, McDonald's has been forced to remove milkshakes from its menu for lack of milk, and Nando's closed 45 restaurants due to a shortage in its stock of chicken. Faced with such a situation, the distributors propose a reassessment of wages. The John Lewis department store chain is offering a £ 5,000 raise and a £ 1,000 hiring bonus for new drivers, following the lead of other big retailers such as Tesco, Marks & Spencer and Aldi.

The return to more "normal" market conditions will take time. According to IMF forecasts, global growth will be more moderate in 2022, but it is still expected to reach 4.9%. Trade in goods will also continue to grow, although here too, growth will weaken. The tensions observed in the supply chain should therefore ease but they will not disappear and transport prices will remain at high levels.