Transatlantic Trade: a new “mini trade deal” between the EU and the US

On August 21st, the US and the EU reached a new tariff agreement. For the first time in twenty years, both sides have agreed on tariff reductions on certain goods, in particular on US lobster.

According to August’s tariff agreement, the EU will remove the tariff on US lobsters with a trade value of around $111 million in 2017. In response, the US will reduce by 50% its tariffs on several products exported by the EU, including crystal glassware, cigarette lighters, and prepared meals, the total trade value of which was around $160 million in 2017. On September 8th, the European Commission published a proposal to make this agreement effective. For both sides, the tariff reduction will have a retroactive effect beginning on August 1st, 2020. On August 13th, the US also revised the $7.5 billion tariff list on the EU products. This article will analyze the impact on transatlantic trade of these recent events in the US-EU trade relations.

Removal of tariffs on US lobster

The highlight of this mini deal is the EU’s removal of tariffs on US lobster. With the elimination of this tariff, the US hope to restore their competitiveness in the European market. US lobster has been gradually losing its market share since the EU eliminated the tariffs on Canadian lobster in 2017’s EU-Canada FTA. Prior to 2017, US lobster accounted for around 50% of the EU’s imports of lobster from outside of Europe. In 2019, two years after the FTA entered into force, US lobsters accounted for around 22%, while the share of Canadian lobsters had risen to 62% (Figure 1). 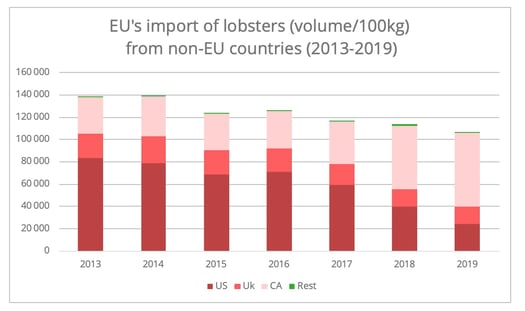 With the removal of these tariffs, some trade diversion from Canada to the US can be envisaged. We can take as an example the exemption by China in February 2020 of the pre-existing tariffs on US lobster. The Chinese imports of US lobster tripled [2] from March to July in 2020 compared to the same period in 2019, despite the pandemic and the tensions between China and the US. During this same period Canadian lobster exports to the Chinese market plummeted by 39%.

Therefore, the possible trade diversion could mean an increase in demand for reefer air cargo capacity leaving American East Coast airports, particularly JFK. The shipping volume of lobster via JFK dropped by around 62% from 2017 to 2019 [3]. However, the situation could prove to be challenging due to the already tight air freight supply capacity caused by the pandemic. According to IATA, global capacity in July shrank by 32.9% for international operations, though this is slightly better than June’s figures. The international capacity for North American and European carriers remained in contraction, down 30.9% and 37.4% respectively in July.

However, hopes for a short-term surge in US lobster on the EU market after the agreement may be premature.

Reduction in tariffs on European products

For the EU, the mini deal announced on August 21st will reduce tariffs by 50% mostly on EU-made consumer goods, such as crystal glassware and cigarette lighters, though the definitive list has not yet been published.

In addition to this deal, on August 13th, the US Trade Representative has also revised the $7.5 billion tariff list implemented in October 2019. The revised list, which entered into force on September 1st, 2020, no longer has Greek cheese and UK biscuits on it but has an equal value of German and French fruit jams, and kitchen knives on it. The additional tariffs could prove challenging for the French fruit processing industry, since the US is France’s largest external market for jams. Although France is its largest jam supplier, the US market may turn to its alternative top suppliers in Canada and South America, due to the geographic proximity.

As most of the products subject to the change in tariffs are consumer products, the degree of US consumer market recovery plays a vital role in analyzing the impact. In August, the latest consumer confidence index shows US consumer spending in decline after a rebound in July and it remains far below pre-pandemic levels. An analysis of the categories of products shows customers are spending more on essentials but less on “discretionary” goods. In fact, French jam imports to the US market increased by 10% in the first half of 2020 compared to the same period in 2019. As such, the negative impact of the imposed tariffs on French and German jams and kitchen knives may be balanced out to some extent by the rise in demand for daily essential food supplies. Similarly, the export of some of the goods which now have a 50% reduction in the tariff, such as prepared meals, may be more significantly stimulated. However, other goods such as crystal glassware may enjoy a more modest increase (Figure 2). 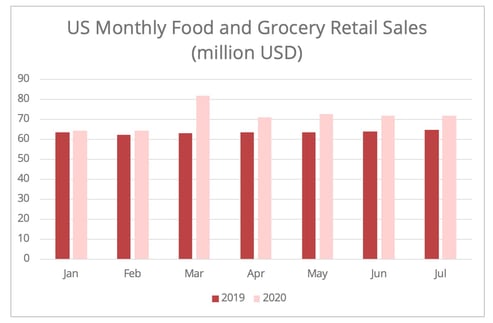 The joint statement by the US and the EU, on August 21st, expressed the optimistic intention that the deal will “lead to additional agreements that create more free, fair, and reciprocal transatlantic trade." However, concluding this mini trade deal does not guarantee a bright future for transatlantic trade relations. There is a significant number of challenges to be overcome, such as US tariffs on EU steel. Also, this short joint statement did not touch upon the earlier revision of tariffs made by the USTR on August 13th. Furthermore, the resignation of Phil Hogan, EU chief trade commissioner, creates uncertainty in the EU-US trade negotiations.

How Trump may utilize policy towards the EU to support his presidential election also adds uncertainty to transatlantic trade relations. This mini trade deal can be partially interpreted as a move to win one of the swing states, Maine, in the upcoming presidential election in November. Similarly, some strategic political calculation is perhaps behind the revision of the $7.5 billion tariff list. By removing tariffs on some UK goods, while keeping them on whisky, the US may hope for a better bargaining position in the on-going US-UK trade deal negotiations, though a deal is unlikely to be done before November. Similarly, by imposing tariffs on French and German goods, the US hope to gain leverage not only in the on-going EU-US trade negotiation but also on other trade or political issues with France or Germany, such as the French digital tax on US tech firms, or Germany’s contribution to NATO.