With great ambitions in transport and logistics, Turkey hopes to benefit from the reconfiguration of global supply chains.

The strategic geographic location of Turkey connecting Asia and Europe has made it an increasingly attractive alternative in the context of global supply chain reconfiguration. The current geopolitical turmoil may also fortify this status. This article examines the growing Turkish economic and transport links with East Asia and Europe.

In the past years, the increase in the diversification in both trade and the origins of foreign direct investment reinforces Turkey's emerging position in the global supply chain as a connection between East Asia and Europe.

The pandemic has especially accelerated Turkey's demand for East Asian intermediate goods in the machinery and electronic equipment sectors (Figure 2).

One exception is the textile sector. Turkish imports of intermediate goods from East Asia has declined from 42% in 2010 to 28% in 2021, though China remains Turkey’s largest textile intermediate material supplier, accounting for 19% of the total supply in 2021 (Figure 2). In lieu, the share of other more geographically proximate textile raw material suppliers, such as Egypt and Uzbekistan, is burgeoning. This trend may signal an increase in efforts to form a more regionalized supply chain in the textile industry. 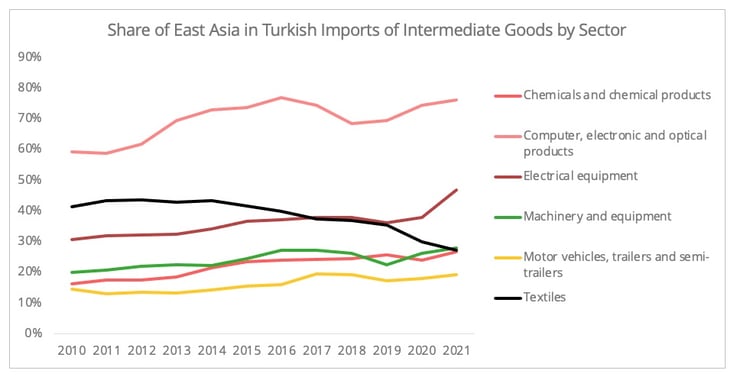 The Turkish manufacturing industry has found a favourable environment for growth in the EU, which has long been the country’s largest partner. In 2021, 45% of Turkey's exports went to the EU, with a 21% higher export value than in 2019. Turkey’s share in the total imports to the EU also modestly increased from 2.6% to 3.7% in the past decade.

Interestingly, Turkish exports to the US, its third largest market, also jumped by 64% compared to 2019. The increasing US demand for both intermediate and finished goods from Turkey can appear counter-intuitive amid the discussion of regionalizing the supply chain and the logistics upheavals. The 2021 growth can be primarily attributed to the US imports of Turkish carpets! This can be associated with the increasing demand for home décor during the pandemic and the US tariff on Chinese carpets.

Overall, the rising Turkish exports to the European and American markets, especially for intermediate goods, signals that the country is more integrated into the global supply chain, especially since the pandemic (Figure 3). However, the burgeoning Turkish imports from East Asian intermediate goods also highlights the Turkish reliance on East Asian second-and third-tier suppliers to a certain degree. 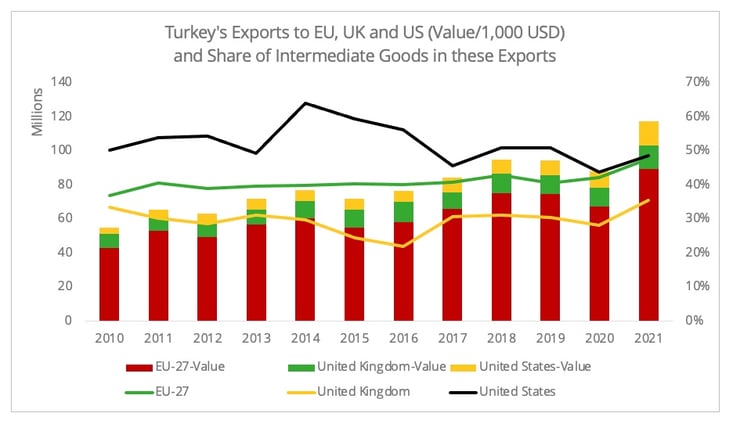 The strategic significance of Turkey has also attracted growing and more diverse foreign investment (Figure 4). In 2021, FDI[2] to Turkey had reached its highest levels since 2016, with a noticeable share from East Asia and North America, with many perceiving Turkey as a nearshoring option to serve the European market. 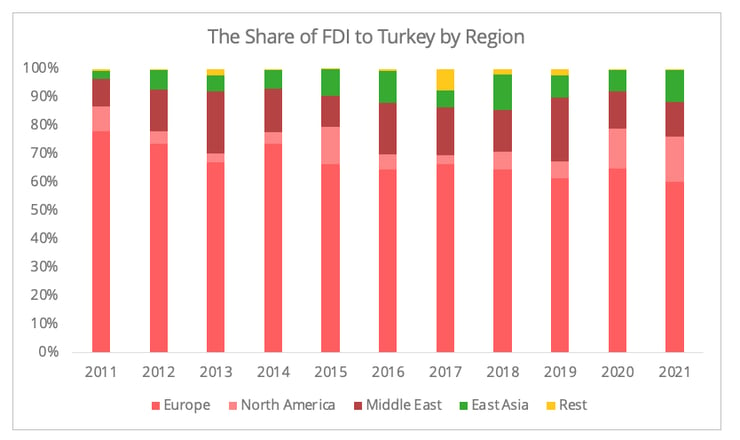 Figure 4 - Central Bank of the Republic of Turkey

Among East Asian investors, Japan and South Korea are the two largest sources of FDI to Turkey. Chinese investment in the Turkish manufacturing sector is relatively small and was concentrated in the mobile phone manufacturing industry in 2021. In line with the spike in Turkey-US trade was a ten-year high in US FDI in Turkey in 2021. There are also joint investments between Asia and North America in Turkey. For instance, Ford in collaboration with South Korean energy company SK Innovation and Turkish company Koc Holding, plans to build its largest EV battery manufacturing site in Turkey for the European market, aiming for mass production in 2025. 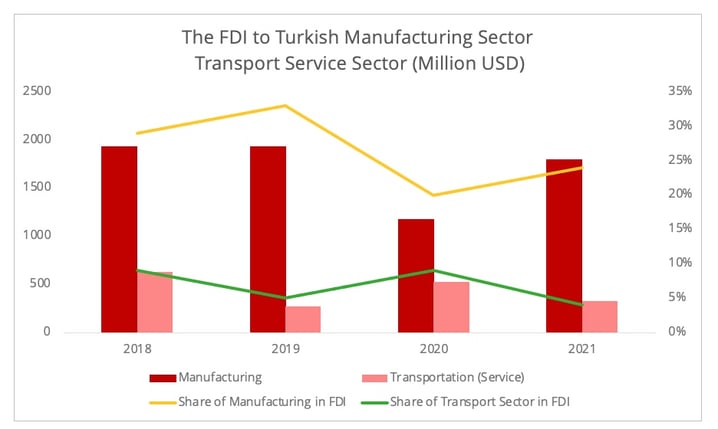 Figure 5 - Data Source : Central Bank of the Republic of Turkey

As for industry, the lion’s share of FDI went to the chemical, automotive, and electronic equipment industries (Figure 6). These are also the key sectors that contributed most to the Turkish trade in intermediate goods with the EU and East Asia, which points to a bright future ahead thanks to Turkey’s position that connects the two regions. Furthermore, numerous investment projects in 2021 in the Turkish packaging industry may be another indicator of investors’ confidence in Turkey’s export potential. Indeed, according to the Turkish Ministry of Trade, the need for packaging for export activities is one of the drivers of this industry. 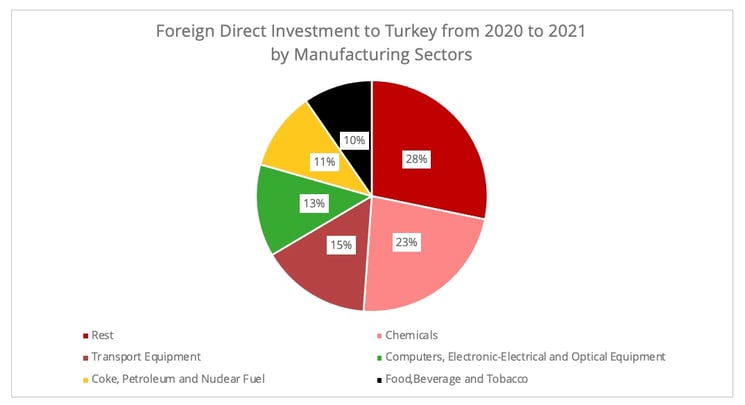 Figure 6 - Data Source: Central Bank of the Republic of Turkey

Although the FDI to the Turkish transport service sector has fluctuated over the years (Figure 5), the global supply chain reconfiguration and the desire to seek alternative multi-modal freight routes to the trans-Siberian railway connection could attract new investment in the Turkish logistics sector. Its strategic location has already generated significant progress in the transport industry. For instance, Turkish Airlines saw a 46% increase in its cargo revenue and 26% in air cargo volume in 2021. In just five years, from 2016 to 2020, the company has risen from 20th to 8th place in the world in the IATA ranking of airlines for cargo activity.

This situation will be further reinforced by Turkey’s active pursuit of becoming a logistics superpower by 2053. In April 2022, the Turkish government published its 30-Year Transport and Logistics Master Plan to elevate the logistics infrastructure across all transportation modes (Table 1). Under this plan, Turkey plans to invest 153 billion USD by 2053 to support the massive advances in infrastructure.

Table 1 - Targets set by the Transport and Logistics Master Plan

Here we elaborate on the future of rail freight as Turkey is a key player in developing the trans-Caspian rail connection (Middle Corridor). Due to the Russia-Ukraine war, the Middle Corridor generates a rising market interest as an alternative to the largely disrupted Asia-Europe rail freight via the trans-Siberian railway. The shipping volume via the Middle Corridor in the first quarter of 2022 reportedly had a year-on-year increase of 30%, reaching 19,500 TEUs.

Turkey had already actively engaged in developing the Middle Corridor prior to the war and aimed to attract 30% of rail freight between Asia and Europe to this route.

However, the current preferred option to connect China and Germany via the middle corridor is through the connection via Poti (Georgia) and Constanta (Romania), rather than via Turkey. An analysis we published earlier suggests that the capability to attract German flow is critical for a route’s success, as Germany is the largest destination for Asia-Europe rail freight. While shippers can choose to go from Poti to Germany either via Constanta or via Istanbul, it is clear that the latter mainly serves the Turkish domestic market, at least for the time being.

New rail freight options are more likely to emerge when demand starts to pick up. Furthermore, Turkey's more integrated position in linking Asia and Europe in the global supply chain may also lure shippers into choosing a connection via Turkey. In particular, the manufacturing industries with a growing FDI in Turkey, such as automotive parts and machinery components, are also the commodities that comprised most of the rail freight shipping flows between Asia and Europe prior to the war.

Undoubtedly, the market for transport services between Turkey and Europe is quite dynamic. For instance, there is a newly launched intermodal service to connect Istanbul with France and the UK, it especially targets shippers of textile and automotive parts. Furthermore, infrastructure improvement projects in Turkey allow a better connection with the Trans-European transport network (TEN-T).

Structurally, the long-term projection of the Middle Corridor relies on an improvement of infrastructure and a more coordinated multi-lateral collaboration, such as facilitated customs procedures (Figure 7). The Middle Corridor currently only holds a limited shipping capacity. The envisioned traffic of 50,000 TEUs via the Middle Corridor in 2022 would only account for around 8% of the volume between China and Europe via the trans-Siberian railway in 2021[3]. Furthermore, political instability and red tape are persistent factors that may deter shippers from using this option. The in-plan joint venture between Turkey, Georgia, Azerbaijan, and Kazakhstan in 2023 to develop a middle corridor aimed at smoothing the process may help.

Finally, it will take time to regain market confidence. The Asia-Europe rail freight connection has lost its primary customers, as several automotive companies have decided to withdraw from this service. On a positive note, however, the development of multimodal routes with Europe benefits from an incentive policy on the part of China, which will sustain the operation even in difficult times. 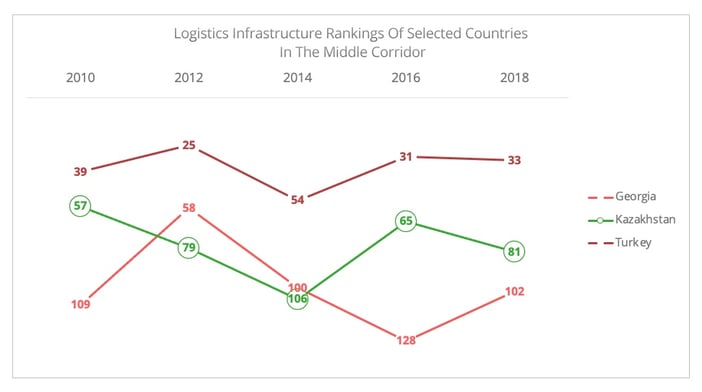 Is Turkey a Competitive Alternative?

Turkey is not the only country hoping to seize the opportunity presented by the global supply chain reconfiguration. Is it therefore a competitive alternative? In comparison with other options, such as India and Vietnam, Turkey holds advantages in terms of its technological know-how combined with relatively good logistics performance, though the relative importance of the latter is eroding (Figures 8&9). 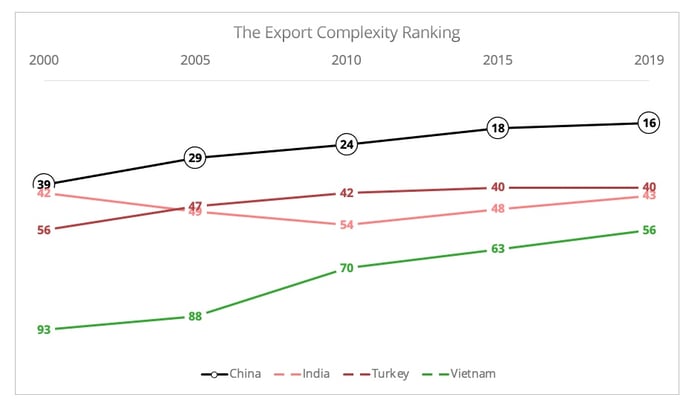 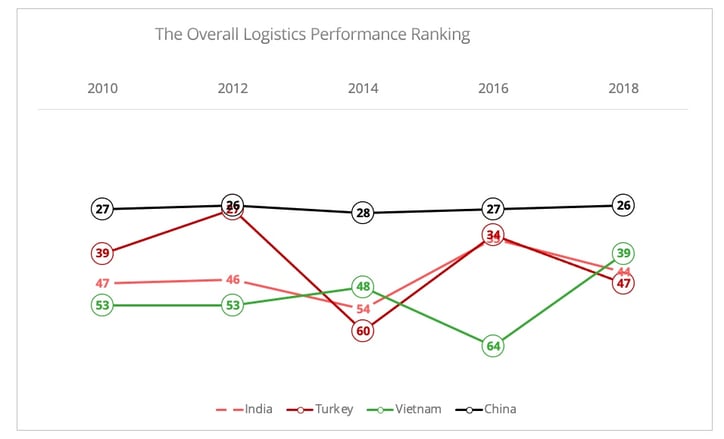 However, the currency crisis coupled with geopolitical tension undermines the attractiveness of Turkey. The complex global value chain has generated new dynamics in the relation between currency and trade performance. The depreciation of the Turkish Lira, therefore, increases Turkey's cost of importing energy and raw material, which is already soaring following the geopolitical crisis. Turkey is heavily dependent on the external supply of raw material and energy, and this undermines the benefit of currency depreciation for exports. Furthermore, the heavy inflation amid the currency crisis could lead to the loss of skilled labour, a crucial factor in attracting foreign investment.

When considering Turkey’s position in the global context, it seems that it may face some disadvantages in certain aspects.

[3] The data is generated from ERAI 1520, which indicates that the annual rail freight between China and the EU via trans-Siberian railway was 618,180 TEUs in 2021.

[4] There is no recent data for Azerbaijan.