DOSSIER. Upply continues its “Tour de France of Road Freight Transport (RFT)” with a stopover in Auvergne Rhône-Alpes. A powerful region, of which we will paint an economic portrait, before evoking in an article to follow the specific situation for road freight transport.

"Auvergne Rhône-Alpes is among the most important regions in Europe, both in terms of the extent of its territory and population and the wealth that is created there". These words from the Chamber of Commerce and Industry of Auvergne Rhône-Alpes set the scene: the economic power of this region makes it an attractive area, conducive to trade and therefore, also to the development of transport and logistics activities.

The result of the merger in 2016 of the former Auvergne and Rhônes-Alpes regions, the new entity consists of 12 departments. “Given the size of the region, the distribution of activity is relatively heterogeneous. We can essentially identify three main areas of activity: the Alpine arc, very industrialized in particular by the metallurgy and plastics sectors, the Rhone corridor very concentrated around the chemistry and petroleum sectors to the south, and finally Auvergne with of course Michelin in Clermont-Ferrand but also a lot of agri-food activities, livestock and water production”, sums up Jean-Christophe Gautheron, general secretary of the OTRE Auvergne-Rhône-Alpes.

“The pharmaceutical industry is also an important sector in the region around Lyon. On the other hand, Auvergne Rhône-Alpes is an important consumer area,” adds Jean-Christian Vialelles, regional delegate for TLF Auvergne Rhône-Alpes. A jackpot that attracts the big names in retail: Amazon will install a 200,000 m² warehouse near Lyon-Saint Exupéry airport.

A geographic position that is favorable to logistics

In a 2017 study on the logistics sector in Auvergne-Rhône-Alpes, the INSEE highlights "the advantageous geographical position" of the region, which facilitates European trade and services to many metropolises. "It is intersected by the north-south, Lille-Paris-Marseille rail and motorway transport corridor, with ramifications to Switzerland and Italy (access to Geneva, to the Fréjus and Mont-Blanc tunnels ...) , and by the Rhône and Saône valleys which form important fluvial routes. This privileged position results in the installation of numerous establishments of a national and international level, close to transport infrastructures and vast areas of consumption”, details the study. “The North-South corridor is extremely buoyant. As far as the East-West corridor is concerned, we can say that it starts to take off from the Lyon road junction,” says Jean-Christophe Gautheron.

These characteristics have made the Auvergne-Rhône-Alpes region one of the main French hubs for freight transport and logistics. It has nearly 7,500 establishments in these sectors. According to the Atlas of warehouses and logistics areas produced in 2015 by the Transport Ministry’s Observatory and Statistics Services, the region had at the time 590 warehouses and logistical platforms of more than 5,000 m², which placed it in 3rd position nationally behind the Hauts-de-France and Ile-de-France regions. Standing at 16,329 m², the average surface area of these establishments was however below the metropolitan average.

The region has two logistical areas of “national” importance: Saint-Quentin-Fallavier (employment area for Bourgoin-Jallieu) and Saint-Vulbas (employment area for Ambérieu-en-Bugey). "The first was created in the early 1970s, the second was developed from the 1990s onwards as part of the Plaine de l'Ain industrial park," said the study published by the INSEE in 2017. In addition, there are areas of regional importance, mainly around large cities (Lyon, Clermont-Ferrand, Saint-Etienne ...). “The employment areas of Villefranche-sur-Saône and Montélimar are also specialized in logistics. They have very large warehouse and logistics platform areas close to freeway access points on the Paris-Marseille corridor,” adds the INSEE report.

“The region can also rely on a large airport, Lyon Saint-Exupéry, and on the Edouard Herriot port, sometimes nicknamed 'Marseille's second port'. These are infrastructures which enhance the region's economic strengths ”, says Jean-Christian Vialelles.

Industry is a sector that heavily structures the region. In fact Auvergne Rhône-Alpes is ranked in 2nd place nationally for its GDP but is in pole position in the ranking of industrial regions. This activity generates 18.3% of the added value in Auvergne-Rhône-Alpes, compared to 14.3% for mainland France globally. “Its portfolio of activities is diversified, and largely geared towards export. The regional industry is strongly placed for cutting-edge activities: machinery and other solutions for the industry of the future, digital technology, electronic components, energy, health industries, lathe turning, plastics, technical textiles, eco-technologies ... ", specifies the CCI.

As for retail activities, they are aided by the size of the population base, since the region is ranked in 2nd place nationally here too. But they also benefit from the industrial strength, which promotes inter-company trade.

Finally, in the agricultural sector, the region is distinguished by the richness of its wine-growing area, but can also count on "its livestock breeding, the wealth of its orchards, its cereal production and its cheese varieties", the CCI lists.

A strong vocation in import-export 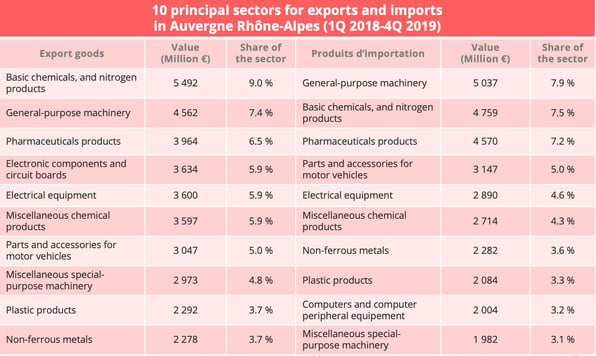 The Auvergne Rhône-Alpes region's main trading partners are European countries, with Germany and Italy in the lead. The United States and China complete the Top 10, the trade balance being positive with the first and negative with the second. 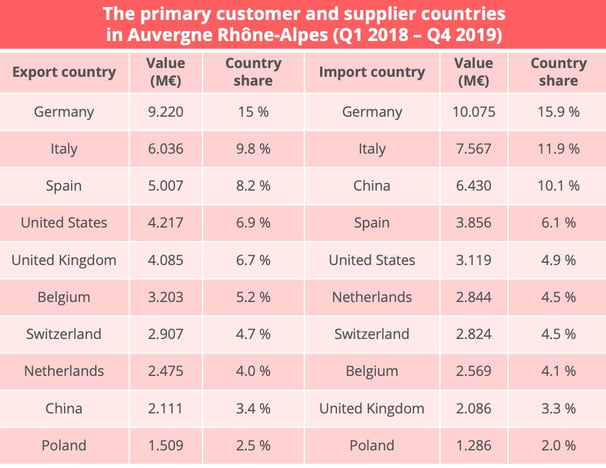 The Auvergne-Rhône-Alpes region in figures