DOSSIER. The third stage of our Tour de France of road freight transport, the Bourgogne-Franche-Comté region, a land of industry and agriculture whilst enjoying a favorable geographical position. The region is currently reflecting on how it can make better use of the transport and logistics sector.

The Bourgogne-Franche-Comté region is surrounded by some rather rich and powerful neighbors... bordered by Switzerland, and the regions of Ile-de-France, Centre-Val de Loire, Grand-Est and Auvergne-Rhône-Alpes, it "Enjoys an advantageous strategic position with regard to both traffic flows from North to South leaving Northern Europe towards the Mediterranean and from East to West leaving Eastern Europe towards Spain ( ...). The region is also located on one of the main routes for French traffic flow, namely the Paris-Lyon-Marseille link", as is pointed out by the Cerema (Centre for studies and expertise on risks, the environment, mobility and planning), in a study for the Auvergne-Rhône-Alpes DREAL (Regional Department for Environment, Planning and Housing) published in April 2018.

The Bourgogne-Franche-Comté region can count on a solid network of infrastructures, in particular on a dense network of roads. It relies on two structural freeways: "one on a Pan-European scale that leads to Spain and Germany and another on a national scale that links to Paris, Lyon and Marseille", says the Cerema study, pointing out that most of the major cities in the region, namely Dijon, Avallon, Auxerre, Beaune, Chalon-sur-Saône, Besançon, Montbéliard and Belfort, are linked by these freeways. The Cerema only notes one weakness: the isolation of Nevers, and more generally of the Nièvre departement. Another inconvenience: these features make the region a preferred transit zone, with traffic flowing through without "creating any added value for the area".

The Bourgogne-Franche-Comté region also has multimodal infrastructures, including many river ports, which are widely used by the agricultural sector. However, a large part of the network is made up of narrow canals, which does not make diversification easy.

Logistics marked by the industrial profile

Faced with this domination of transitory traffic flows, can the regional economy take over to bolster the local transport and logistics ecosystem? A study of Bourgogne-Franche-Comté by the INSEE lists 3,250 "logistics companies" in a broad sense, divided into three areas of activity: transport of goods (46%), the organization of freight transport and other services (43%) and the handling, storage and packaging sector (11%).

According to the Atlas of Warehouses and Logistics Areas produced by the Transport Ministry’s Observatory and Statistics Services, the region had 207 warehouses of more than 5,000 m2 in 2015, with an average area of 16,500 m², of which 93 were in the manufacturing industry sector, around 60 were in retail and 39 in warehousing and transport per se.

An interesting fact is that 23% of logistic jobs are held in industrial companies, compared to 16% for the whole of metropolitan France.

"We are in a traditionally industrial region since it is placed 1st among the 13 new large regions on the criterion of the number of industrial jobs," confirms Philippe Demonteix, regional delegate for the FNTR (National Federation of Road Transport). "The Rhine-Rhone axis is the backbone of the region, along which we can find very large industries, particularly in the automotive sector, but also in nuclear power and industrial subcontracting. Four sectors account for 56% of the workforce in industry: metallurgy, the manufacture of metal products, the manufacture of transport equipment and the manufacture of food & beverages," explains Philippe Demonteix.

Logically, these activities are found in the top 10 of the region's imports and exports. The main shippers in the region are also a reflection of this, companies such as Alstom, Areva, Faurecia, GE Energy Products, Michelin, Saint-Gobain, Schneider Electric, Solvay and of course PSA, are to name but a few. 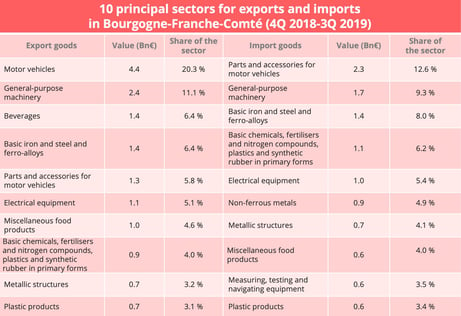 An INSEE analysis note published in June 2019 highlights the specialization of certain parts of the region in particular sectors: chemistry in the Grand Dole, the leather and shoe industry in Auxois-Morvan, watchmaking, fine jewelery and jewelery in the Haut-Doubs, activities related to forestry in the Vosges Sônoises, or eyewear and plastics in the Haut-Jura. "In addition, half of the industrial jobs in Grand Dole are linked to foreign groups; conversely, this dependence is very low in Haut-Jura," says the INSEE note.

The region has not been spared by the movement towards deindustrialization, with more than 37,000 jobs lost since 2007. This decline, during the crisis of 2008, was particularly brutal in Franche-Comté, which is very dependent on the automobile industry and was mainly concentrated around Sochaux-Montbéliard-Héricourt. Burgundy, whose economic fabric is more diversified and therefore less dependent on one large sector or one large company, has suffered relatively less.

Apart from this industrial base, the local economy is also driven by agricultural activities, particularly wines with registered designations, field crops and livestock. The lumber and forestry sector, which is very present in the region, is also considered promising. "Wood is a renewable material. Due to individual ambitions and national goals for sustainable development, timber construction has a future (...). In the same way, the paper and cardboard industry has potential," is the Cerema report's conclusion. 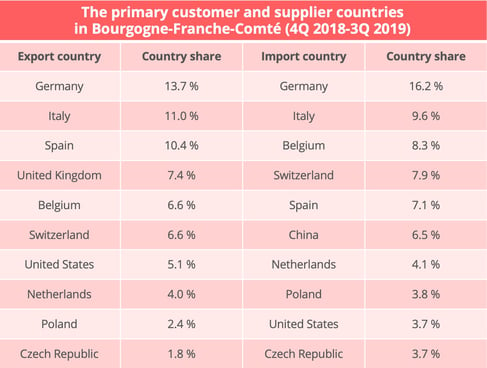 The Bourgogne-Franche-Comté Region in figures