GRAND EST: The logistical potential is still only partially exploited

DOSSIER. Upply invites you to take part in its second stop-off on its “Tour de France of Road Freight Transport” which was created as part of the launch of its marketplace. Following on from the Hauts-de-France, we would like to make an excursion into the Grand Est in order to analyse its regional economy and the different challenges facing the transport and logistics sector.

The soil is rich, but the seeds have yet to be sown. This is how one could summarize the report on the logistics sector in the French Grand Est region, published in April 2018 at the request of the dynamic ORT&L (Regional Observatory of Transport and Logistics).

Its geographical localisation is the foremost asset that this vast region has to offer. It was born from the amalgamation of the Alsace, Champagne-Ardenne and Lorraine regions. As is pointed out by the ORT&L report, the Grand Est “makes up a large European logistical area that is bordered by the Blue Banana and is close to Paris”. It is the only French region that comprises 4 land borders (those with Germany, Belgium, Luxemburg and Switzerland), and as such benefits from its proximity with a wealthy part of Europe and the enormous potential that comes from the foremost national economic basin, Ile-de-France, that is in fact close to its western front.

We can add to that the potentially significant consumer capacity within its own territory owing to the fact that the Grand Est is the 5th largest region in terms of population.

A rich network of infrastructures

The region is linked by the great European road, rail and waterway corridors. Three major north-south routes structure the Grand Est according to the authors of the ORT&L report: “A Rhine corridor to which the Alsatian logistics are linked, a “Eurocorridor” from the Benelux countries to the Mediterranean Sea along the Moselle which structures French logistics and is centred around the Lyon area, and lastly the Champagne furrow. This last corridor could be seen as being peri-Parisian and relies mostly on endogenous logistics.”

The picture is completed by the important East-West corridors: the A4 motorway (running from Paris through Metz to Strasbourg) and the N4 main road, “these unify three former regions but are not yet considered as major corridors in terms of structuring the logistical functions” and also the corridor Paris-Basel which is centred around the A5 and A26 motorways, as pointed out in the report.

This dense network is of course a major asset for the development of transport and logistics activities…but it is also an element that is susceptible to favouring transit, to the detriment of the establishment of sites in the area that would create value locally.

Today the territory around the Grand Est contains approximately 5,500 transport and logistics companies (all modes and actives combined). Eric Mignon, the regional delegate for the Lorraine section of the FNTR points out that, “We have around 3,000 road haulage companies”.

The latest report from the Accounts Committee for National Transport published in August 2019 indicates that as for the region’s warehouses and logistical platforms of over 5,000 m², in 2016 there were 433 with an average surface area of 19,800 m². This is a little less than the 2015 figures reported in the Warehouse and Logistical Area Atlas, of 472 sites with an average surface of 19,984 m². This report was published by the Transport Ministry’s Observatory and Statistics Services. The ORT&L report points out that the Grand Est “presents a rate of number of platforms that is globally inferior to the national average, however Alsace comes very close to this thanks to its ports.” The port of Strasbourg or the ports on the Mulhouse-Rhine effectively form an attractive hub for logistical activities.

The region struggles with one difficulty though: despite its favourable location, the demand for sites that have a vocation to service Europe, or even nationally, remains low compared to that for “endogenous logistical sites”, as was highlighted in the ORT&L report. In this area the Grand Est clearly suffers from the competition from neighbouring countries, especially those of the Benelux.

“The logistical real estate players, however, have development plans for the whole territory with the exception of the ridge running through Lille-Paris-Lyon-Marseille which is saturated in terms of traffic, building land, and administrative delays for applications” is the view expressed by the authors of the report. The Grand Est region could profit from this situation, particularly in Lorraine which benefits from available building land for large operations (which is not the case for Alsace). Eric Mignon points out that “Moreover, a very large operation has been announced, that of the arrival of Amazon, which plans to implant an enormous logistical base in Metz that should open in 2020”.

A strong industrial and agricultural position

The economy in the Grand Est is characterised by the strength of its industry as it is the 2nd largest in France, with the exception of the Ile-de-France region. It is particularly specialised in the manufacturing, energy production and food industries. Two main areas of production dominate the economy: automobile and machine/tools. “Only one non-industrial sector has managed to enter the list of the region’s top-ten export activities, beverages, which come in at 4th place thanks to the Champagne production.”, as is indicated by the Grand Est DIRECCTE (Regional Direction for Enterprise Competition Consumption Labour and Employment) in its note on foreign trade published in 2017. This observation was also confirmed in 2018.

The Grand Est is significant in terms of its industry, but also for its agriculture, which is proportionally greater than the national average (3.3 % of the added value compared to 1.7 % for the whole of metropolitan France), the Grand Est Chamber of Commerce and Industry states that the region has “a strong wine producing industry, but also cereal farming, polyculture and breeding”. The timber and paper industries also represent a significative source of activity. 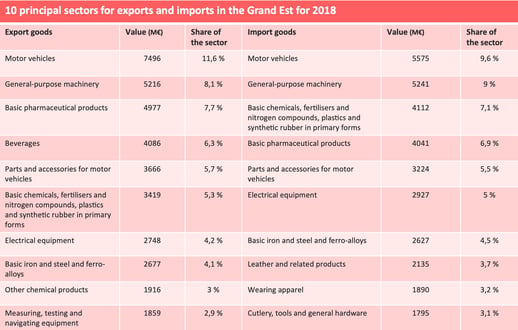 The Grand Est region is placed 2nd in terms of export regions behind Ile-de-France, with a total of 64.7 billion euros in 2018 (i.e. 13.4% of French exports). More than half of this comes from Alsace, compared to 27% from Lorraine and almost 20% from Champagne-Ardenne. Industrial parts show a positive balance of trade of close to 2 billion euros. This is also the case for the beverages sector, for which the surplus balance reached 3.6 billion euros in 2018, mainly thanks to Champagne.

The Grand Est DIRECCTE states in its study titled, Territorial Portraits for 2019, that “Pharmaceuticals appear very specific to the Lower Rhine exports but also for imports to Marne. In a similar way, agricultural and forestry machinery remains particularly present at the level of Lower Rhine exports on the one hand and imports to Haut-Marne on the other.”

The list of the Top 20 industrial companies is a very strong reflexion on this region’s industrial vocation. 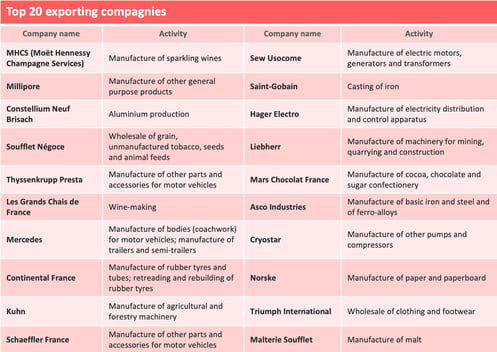 In terms of imports the Grand Est represents 10.4% of all French imports, with a total of 58.3 billion euros in 2018. This figure places it at the 4th place at a national level. The Grand Est Chamber of Commerce and Industry’s study on Grand Est international businesses states that, “The mutualisation of efforts, the know-how and the potential of the 3 former regions could represent important leverage for even wider international development for the Grand Est. Synergies could also be found between the agricultural and wine sectors and industry”

Germany is far ahead in import and export terms

It comes as no surprise that owing to its economic weight and its geographical proximity, Germany represents the primary trade partner for the Grand Est, as indicated by the DIRECCTE figures “of levels of exports and imports close to 16 billion euros”. The trade exchanges are almost balanced (-325 M€ in 2018 in Germany’s favour).

In a more general way, the trade with European countries is largely dominant. The DIRECCTE report shows that the balance is particularly favourable “with Italy which is progressing strongly, Belgium, Spain and especially with the UK where the trade balance has reached 3.7 billion euros in 2018.” In import terms, it can be observed that there is significant traffic from Austria and the Czech Republic.

Outside of Europe the trade is predominantly with the US and China. In 2018, the Grand Est region showed a positive trade balance with the US (+578 M€). Imports from China remained stable at around 3 billion euros, and the trade deficit came to around 1.8 billion euros. 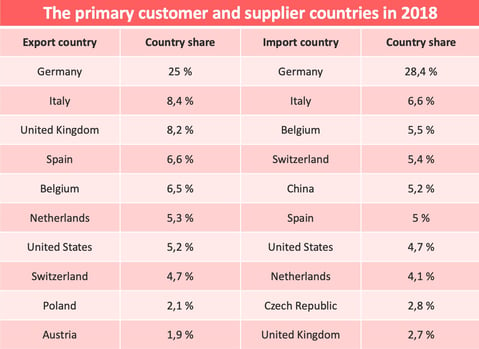 The Grand Est region in figures