Ocean Freight rates have evolved rather differently during the summer on Asia-Europe and Asia-North America routes. An analysis of trade between China and Europe, followed by a comparison with US-China trade, will allow a better understanding of this trend.

The Euro-Asia trade lane seems much calmer now compared to the intense spikes on transatlantic freight rates seen over the summer (Figure 1). In this article, we will first review China-EU trade over the past eight months and then make a comparative analysis between the EU-China and the U.S.-China trade, highlighting Chinese exports to the two counterparts.

Surge in volumes of EU exports to the Chinese market

According to Eurostat, over the past eight months, the EU’s export and import values with China have decreased 1% and increased 5% respectively. Despite this drop in value of exports, the volume has surged 36% in comparison with the same period last year. In August alone, there was a 44% increase compared to August 2019 (Figure 2). 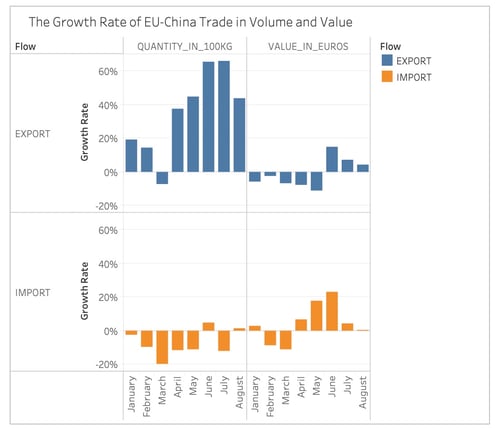 Agricultural products and raw materials contributed significantly to the rise in volume. Apart from the continuing demand for meat since 2018 due to swine fever, it is worth noting the spike in Chinese imports of European cereals, particularly from France which accounted for nearly all EU exports of cereals to the Chinese market over the first seven months of 2020. In the second quarter of 2020, the volume of French grain exports to China was nine times higher than in 2019 (Figure 3) and over the first seven months, France’s share of China’s total grain imports increased from 3% in 2019 to 10% in 2020 [1]. French soft wheat exports to China is expected to surpass one million tonnes for the 2020/2021 season. 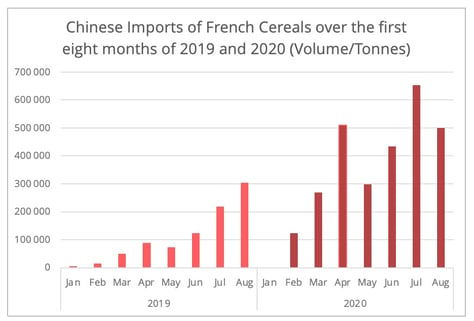 How can this increased Chinese demand for grain be explained?

In this context, Chinese purchases of French grain can be better described as a “responsive” action due to external shocks rather than a permanent shift in the supply chain.

In contrast to the surge in EU export volumes to China, the import volumes decreased by 9% over the first seven months. This is largely due to the decrease in some volume-significant products, mainly steel-related goods and furniture.

Since May, EU import volume from China started to rebound. On the one hand, exports of Chinese personal protective equipment (PPE) balanced out some Chinese export losses on the European market. China supplied 92.3% of the masks that the EU imported in the first semester of 2020.

On the other hand, the recovery of European manufacturing activity contributed to the rebound in imports of Chinese intermediate goods. Industry-wise, this is particularly the case for sectors that are deeply integrated into the global supply chain, such as textile, automotive, and machinery manufacturing (Figure 4). The German manufacturing industry's recovery takes the lead in the warming up of demand for Chinese products.

The above analysis shows there are some shared characteristics between China-U.S. and China-EU trade over the past eight months. For both, agricultural products and raw materials contributed most to the increase in export volumes to the Chinese market. At the same time, PPE and home appliance demands are driving EU and US imports from Chinese manufacturers. Meanwhile, both sides have faced very tight capacity in the freight market due to the decision to instigate blank sailings by the main shipping companies. But there some differences in trade between the two lanes that may have contributed to the disparity in freight rate patterns outbound from China (see Figure 1).

Overall, the low fluctuation in EU-China trade is a factor that contributes to a more stabilized situation in ocean freight rates on this lane. Looking ahead, China-EU trade is facing both opportunities and challenges. The signing of the bilateral Geographic Indications Agreement during the China-EU Summit on September 14th could be welcome news as it should accelerate the bilateral food trade. One hundred agri-food products from each side will be protected under this agreement and this number will be expanded to 175 in the four years following the agreement entering into force. This could be particularly good news for countries such as France and Italy, who are the major gourmet food exporters to China.

The signature of the agreement brings hope to the completion of the EU-China Comprehensive Agreement on Investment, which both sides wish to conclude by the end of this year. However, a significant gap between both parties still needs to be bridged. "China must convince the EU that it is worth having an investment agreement", said Ursula Von der Leyen, president of the European Commission, during the press conference following the EU-China Summit. The means to guarantee a "level playing field" remains the focal point in negotiations.

[1] French share of China’s total imports of grain is calculated by the author.
[2] This is based on an analysis of the major Asian exporters: Mainland China, Taiwan, Japan, South Korea, and ASEAN members, namely, Vietnam, Thailand, Laos, Myanmar, Malaysia, Cambodia, Indonesia, Singapore, Brunei, Philippines.
[3] Figure 8 below does not use containerized shipping volume but the Vessel shipping volume provided by US Census Bureau.