The Free Trade Agreement between the EU and Vietnam is likely to enter into force in July 2020. In this article, we analyze the impact of the Covid-19 crisis on trade between these two stakeholders, and the perspectives in the post-lockdown phase.

Among all the Southeast Asian countries confronting the coronavirus pandemic, Vietnam stands out. With its 270 cases and zero deaths officially reported, Vietnam has eased the lockdown since April 22nd. Furthermore, the Asian Development Bank also forecasts that Vietnam’s economic performance will show considerable resilience. The growth of its GDP should slow down in 2020 to a 4.8% annual increase and then rebound to 6.8% in 2021 in an optimistic scenario. In light of the EU-Vietnam FTA, which is likely to enter into force in July 2020, it is worth taking a close look at the prospect of EU-Vietnam trade, particularly with the gradual ease of the lockdown.

Vietnam is the EU's second-largest ASEAN trading partner and the largest exporter in Southeast Asia. The country's exports to the EU are mainly consumer products, such as smartphones, footwear, and apparel, and the EU's exports are primarily automobile and high-tech products. In the first quarter, Vietnam’s exports to the EU dropped by 5% (figure 1). 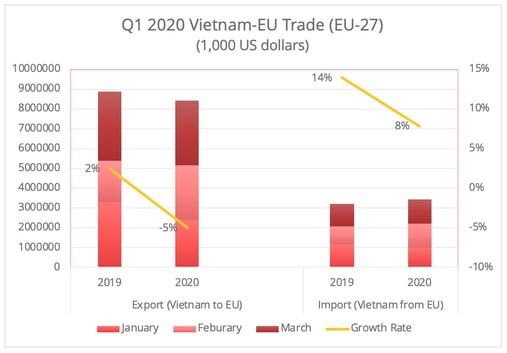 Figure 1 - The growth rate of the EU (EU-27)-Vietnam trade in the first quarter of 2020 is calculated by the author based on data from the General Department of Vietnam Customs and General Statistics Office of Vietnam. The 2019 growth rate is also calculated on EU-27.

The decrease can be attributed to the disrupted supply chain from the supply side, due to the coronavirus outbreak in China. The extended Chinese new year holiday particularly affected Vietnamese textile manufacturing, 13% of which goes to the EU, since more than half of the raw materials are supplied from China. The EU's exports to Vietnam, on the contrary, showed an 8% increase (figure 1). In the first quarter, the impact of the pandemic on the EU side had yet to manifest itself.

According to the EU's recently published forecasts, in 2020, the European exports, extra-EU, will drop by 9.2% and there will be a 8.8% decline in extra-EU imports. Notably, the EU’s export of transport equipment and electrical machinery, which are also its top export products to Vietnam, are forecasted to be the ones hit the most by the pandemic, with over 10% contraction. Since most factories were shut down since late March, the outbound shipping of EU manufactured goods will be hit particularly hard in the second quarter. However, on the bright side, some positive signs of increased activity can be observed, for instance, increased use of electricity in Spain and Italy. Still it is too early to draw further conclusions about an eventual resumption of productivity.

For Vietnam's exports to the EU, the level of Europe’s retail market recovery will be a crucial indicator, along with the ease of the lockdown, since most of Vietnam’s exports to the EU are consumer products. News on Germany’s first week after the ease of lockdown has indicated more cautious consumer behavior.

The increased unemployment rate in the EU in March, from 6.5% up to 6.6%, may also mean less consumer expenditure, particularly on non-essential goods. The forecast by Samsung, the largest overseas investor in Vietnam, points out a sharp decline in smartphone sales in the second quarter which may lead to suggestions of a declined European demand for Vietnam-made smartphones. Vietnam is Samsung's smartphone manufacturing hub. The EU is one of the main destinations for Vietnam-assembled smartphones: one third of them are shipped to EU.

Besides, the impact of the pandemic on consumer behavior, such as supporting local producers, may also lead to reduced demand from the European side for certain made-in-Vietnam products. For some, this could mean some irreversible losses for Vietnam’s exports.

While Vietnam’s usual major exports to EU could be facing challenging times for a while, the EU's demand for made-in-Vietnam personal protective equipment (PPE) may surge. Under the dwindling, and at times cancelled, textile and apparel orders, some Vietnamese textile manufacturers are reported to be turning their production lines to producing masks. The masks are set to export to some European countries and the U.S.

Moreover, Vietnam-made test kits are also reported by local media to have been approved by the WHO and passed the EU standard for import. The Coronavirus situation in Vietnam is actually under control and that means that conditions are provided to allow the lifting of restrictions on the export of PPE products. Easing the lockdown does not mean a return to a pre-pandemic way of life, instead, the entering a new normal, with protective measures in work and daily life scenarios, such as the wearing of masks in public places and maintaining social distancing. This also means a consistent demand for medical protective products for a significant time during the post lockdown phase.

Other than the direct impacts mentioned above, some new dynamics in the EU-Vietnam trade could emerge, since the pandemic may further increase the idea for foreign manufacturers to move existing plants or build new ones outside of China in home or third countries. Behind the trade diversion, we may see a hybrid driving force from both the private and public sectors. In April, the Japanese government launched a stimulus plan, which offers subsidies to Japanese businesses to relocate manufacturing sites outside of China to enhance their supply chain resilience. Vietnam, as one of the major beneficiaries in the China-U.S trade war in 2019, is likely to continue to be the preferred destination for the shift. Nonetheless, we have to keep in mind the entwined supply chain between China and Vietnam, which can be seen in the case of the Vietnamese textile industry. In such cases, the status-quo can be expected to be maintained for a significant period.

As for the high-tech sector, trade diversion tendencies will be less likely to occur than in other labor-intensive manufacturing industries due to multifaceted reasons. The high cost of relocation for the high-tech sector and the salient Chinese market demotivate firms to move their plants out of China, as suggested by the president of the European Chamber of Commerce in China in one interview.

Challenges posed by the overall disruptions in logistics

Of course, the EU-Vietnam trade has been caught in the middle of the highly disrupted logistics situation. An 80% decline in air-freight cargo capacity was reported. For Westbound, carriers cut flights from Vietnam to EU since there was not sufficient volume of cargo to Vietnam, and exports alone can hardly cover the cost for both sides. Vietnamese freight forwarders also indicate that shippers of PPE are turning away from airfreight to ocean freight due to the spike in air-freight rates. In the meantime, for European exports, the increased freight rate due to the massive blank sailings on the Asia-Europe route, particularly in Eastbound shipping, also challenges the trade.

Of course, no one can predict the pandemic’s future situation. If we follow the most optimistic scenario, that of a recovery in the second half of 2020 following a sharp drop in the second quarter, the EU-Vietnam FTA, likely to enter into force in July, could come at the right time to provide a boost to EU-Vietnam trade recovery. In the meantime, Vietnam also needs to further integrate its manufacturing activities to meet the European standard.