China-Europe Rail Freight: Review of the First Semester of 2021

The dynamic growth of rail freight between Asia and Europe continues, as shown by the figures for the first half of the year and the numerous connection projects.

Last year, we wondered whether rail freight connections between Asia and Europe would be a flash in the pan or a lasting trend. The double-digit growth rate in the first semester of 2021 seems to suggest the latter.

An accelerated rate of growth

In 2021, the demand for rail freight between China and Europe has continued to grow considerably. According to China Railway, the shipping volume of China Rail Express reached 707,000 TEUs, with a year-on-year growth rate of 53%[1], up from 2020’s growth rate of 41% (Figure 1). Figures from the Eurasian Rail Alliance Index (ERAI), which records container shipment data between China and the EU along the Eurasian Rail Corridor, also show an increase of 54%.

Specifically, all top five commodities with the highest shipping volume in TEUs have enjoyed double-digit growth during the first semester[2]. The automotive sector, which accounted for around half of the total eastbound shipping volume, enjoyed a shipping volume that doubled over this period. Furthermore, the surge in exports of wood and wood charcoal (HS code 44) to China since the second half of 2020 via rail freight is noteworthy. This could be due to the joint effects of shippers diverting to rail freight and the growing global demand in home decorating improvements. 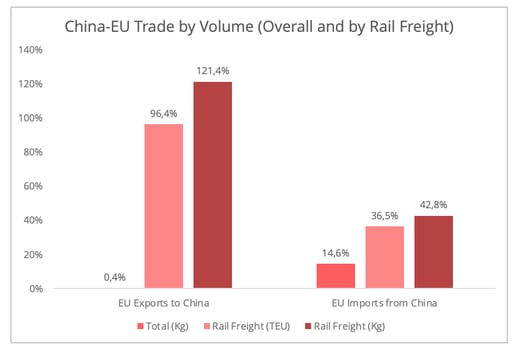 The popularity of the China-Europe rail freight led to emerging multimodal connections between Europe and a wider range of Asian countries, such as Japan, South Korea, and Vietnam. Regarding the multimodal connections between the EU and Vietnam, the shipping volume in the first semester of 2021 has grown 48% in volume and 20% in value[3]. As seen in the China-Europe rail freight connection, a sharp increase in eastbound traffic can be observed, 116% in volume (Tons) and 70% in value (Euros). In terms of volume, the increase in exports from the EU to Vietnam via rail freight is mainly from wood and dairy products. Transport equipment and dairy products contributed the most to the increase in shipping value. 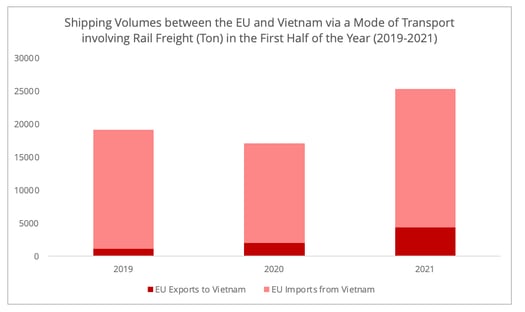 One byproduct of the continued growth of shipping volumes is the increase in shipping times in both directions. According to the ERAI statistics, the average shipping time westbound in the first semester of 2021 (China to Europe) increased by 21% compared to 2020 and by 40% eastbound. This indicates that the rate of improvement in infrastructure on the main route is still lagging behind the surge in demand for rail freight on it.

As a result of the congestion at the major border crossing point between Poland and Belarus, more shippers are turning to alternative routes. Shipments via Kaliningrad are reported to have enjoyed a 5.5-fold increase in the first semester of 2021 and 8.8-fold growth compared to 2019. Besides Kaliningrad, multimodal services via St. Petersburg have also gained popularity, especially as a means of linking Japan and South Korea with Europe.

Favourable outlook for the 2nd half of 2021

The positive global economic outlook for the second semester suggests that rail freight between Asia and Europe is expected to grow continuously. The IHS Markit’s flash composite PMI for the eurozone came in at 59.5 in August, despite showing a slight decrease from July’s figure of 60.2 this indicates an optimistic trade scenario for the third quarter of 2021.

“The increasing demand for rail freight inevitably adds pressure to the already frequently congested main border crossing between Poland and Belarus. The delays and congestion at various border crossings, China-Kazakhstan and Poland-Belarus, are expected to result in a 30% rail freight capacity reduction in September. Other factors such as container shortage, natural disasters and strikes also curtail rail freight efficiency. This, in return, adds the attractiveness of the alternative routes to enter the EU, especially the options via Russia.”

Until now, the prosperity of rail freight in the Europe-Asia connection is still tightly associated with the disrupted global shipping market due to the pandemic. In the long term, climate policy will be another critical factor affecting the sustainable growth of the market. The recently passed “Fit for 55” package in the EU could certainly be another boost for the rail freight market.

Finally, policy and market endorsement of rail freight could lead to some new attempts at rail freight connections beyond Europe and East Asia. For instance, since June 2021 there was a trial block train from Finland (Helsinki) to India (Mumbai) via the International South-North Corridor. Although this rail connection remains at the trial stage, the decision of resuming the EU-India FTA negotiation and the fact that India is a significant manufacturing diversification option give a taste of the potential of this connection.

[1] China Rail Express is the official name of rail freight between China and Europe. The statistics of China-Europe rail freight provided by China Railway includes both EU and non-EU countries, such as Russia and Belarus. To make a more precise evaluation, we have also included two other datasets in the analysis: Extra-EU Trade Since 2000 by Mode of Transport and ERAI Statistics.

[3] The data is based on the Extra-EU Trade Since 2000 by Mode of Transport. The transportation mode is defined by the shipping mode upon exiting or entering the EU. This data serves as an indicator of the proportion of rail freight involved in trade connections between the EU and non-EU countries.