China's economy is slowing down. The sluggishness of the domestic market is at least as worrying as the restriction of Chinese manufacturing activities under the stringent “Zero-Covid” policy.

While Shanghai struggles to resume production, the contracting Chinese market poses another challenge to the global economic recovery. China is not only the world's largest manufacturer, but also a gigantic market. A slow recovery of the Chinese demand will have an impact on the reconfiguration of the global supply chain and on potential alternative markets.

The strict anti-covid measures in major Chinese cities in the past few months not only roiled manufacturing activities but have also largely hampered the consumer market in China. The total retail sales of consumer goods in May recorded another YoY fall of 6.7% after tumbling 11.1% in April (Figure 1). Specifically, automotive, home décor, the fashion industry[1], and cosmetics were among the sectors hit the hardest. 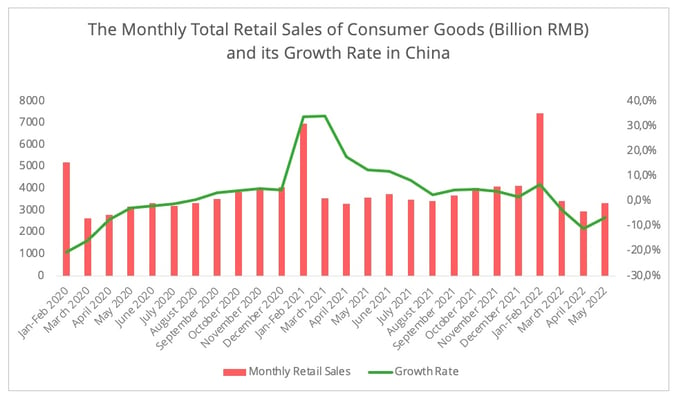 Consumer demand is unlikely to see a swift rebound after the gradual easing of restrictions. China's erratic "Zero-Covid" policy is indeed amplifying consumer pessimism, especially with the mass testing conducted in Shanghai in the aftermath of the lifting of the lockdown on June 1. For example, Chinese e-commerce giant JD.com reported its slowest sales growth for the “618” (June 18th) shopping festival, the second largest online shopping event in China, which was only 10% compared to 20% growths in past years.

The surging unemployment rate, coupled with rising inflation, is hampering the recovery in consumer demand (Figure 2). 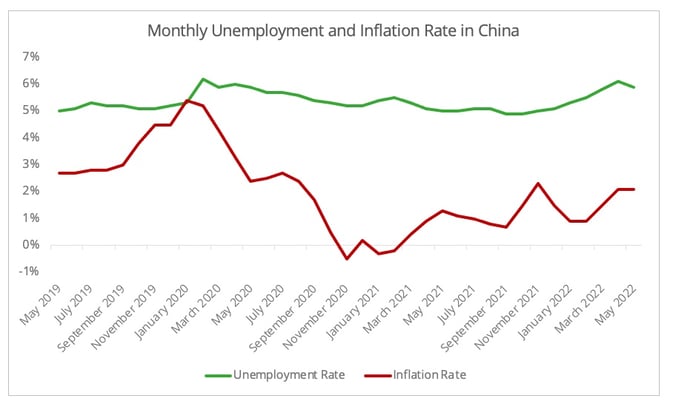 The new order index for May, though in recovery, remains below 50[2], indicating an overall lack of confidence in market demand for the near-term (Figure 3). This differs from the situation during the first Covid outbreak in early 2020, when orders recovered relatively quickly. 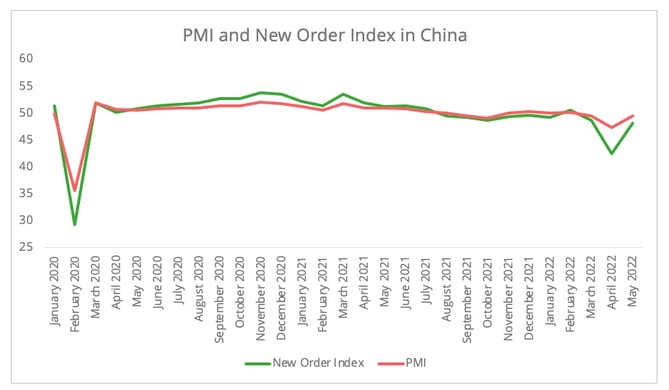 The disrupted domestic market is challenging China’s pursuit since the last two years of more self-reliance on both domestic supply and demand, especially in light of the declining external market. As a response, policies have been issued to boost consumption, including purchase tax cuts for certain passenger vehicles. Some local authorities also issued vouchers to encourage spending. However, the value of the vouchers is reported to be minuscule compared to the regional GDP, which suggests there will be a limited effect in boosting the economy.

As the world’s second largest economy, changes in Chinese domestic demand inexorably have an impact on the global supply chain.

The drop in demand is reflected in the declining Chinese imports of both intermediate and finished products, especially in the machinery and automotive industries. The global steel and iron ore markets are also suffering as their primary growth engine, the Chinese real estate market, is struggling.

It is to be noted that Chinese demand for certain bulk commodities is likely to be robust in response to the worldwide energy and food shortage. For instance, the US export of soybeans to China in the first four months has increased 6% in volume and 29% in value[3]. Similarly, Chinese imports from Indonesia have jumped by 36% in the first five months, primarily driven by imports of minerals[4].

Weakened internal and external markets will inevitably accentuate the skewed trade balance between China and its key trading partners (Figure 4). The shrinking external market will also cut Chinese imports of raw materials and intermediate goods for re-exporting purposes, which accounted for a little less than 20% of total Chinese imports in 2021[5]. Furthermore, the current congestion in North European ports also hampers the short-term availability of containers for eastbound shipping to China. In the long term, the Chinese pursuit of self-sufficiency will also reduce its demand for foreign supplies, especially key raw materials, and advanced technological intermediate goods. 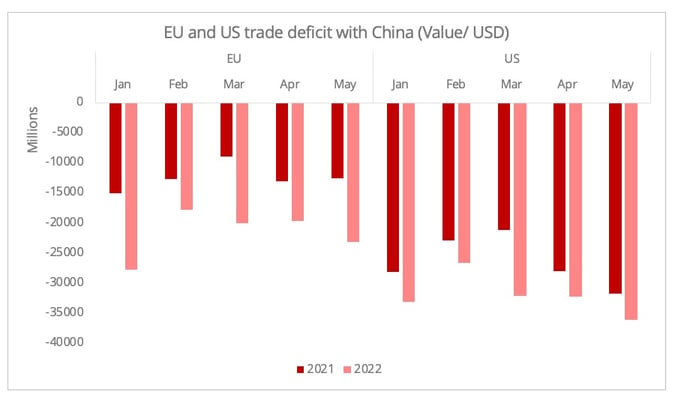 In the upcoming months, the EU and Japan could be especially vulnerable to a lukewarm Chinese consumer market scenario. These two countries are the largest suppliers to the Chinese automotive and cosmetic sectors. The two industries suffered a significant decline in retail in China following the recent lockdown, they both entail higher imports in comparison to some other categories that have also seen dropping sales such as apparel. For instance, passenger vehicles accounted for 13% of China's imports from Germany in 2021. Cosmetic products accounted for 11% of China's total imports from France, 18% of France's total exports of cosmetic goods went to China last year[6].

In the first five months of 2022, Chinese imports from the EU and Japan fell by 7% and 6% respectively. These are the only two countries with falling Chinese imports among the country’s top five largest trading partners (Figure 5). 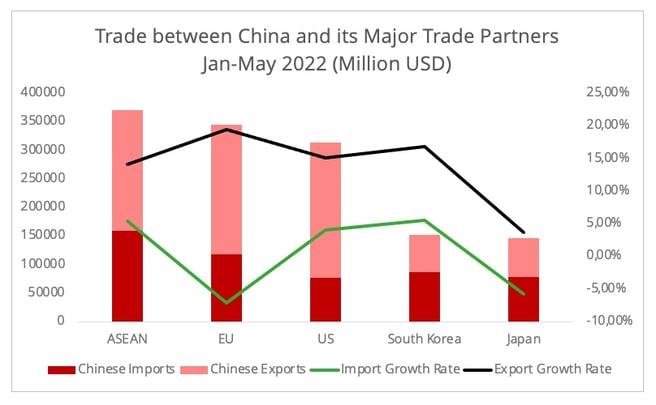 Foreign enterprises can also face heightened competition from local manufacturers in the Chinese market. The shrinking external demand means domestic manufacturers previously targeting the export sector will also turn inward. The competitive prices offered by local manufacturers, coupled with a growing receptivity to the concept of 'nationalist consumption' in China, grant them advantages in the Chinese market amid the burgeoning inflation and unemployment rates. The price factor is glaring in Apple’s decreased share of the Chinese mobile phone market in the first quarter of 2022.

Meanwhile, certain preferential conditions granted by local authorities to Chinese companies placed another hurdle for foreign enterprises competing in the Chinese market. This situation may be further intensified in the context of a more self-reliant China. The German Chamber of Commerce has highlighted this issue, advocating for a level playing field in the Chinese market.

Recent surveys among European and American companies in China have all pointed to an erosion in the attractiveness of the Chinese market under the “Zero-Covid” policy. While most respondents remain well committed to the Chinese market they recognise it carries considerable uncertainty and so market diversification seems to be a natural move to improve business resilience.

If this trend continues, especially at a time when the global economy faces the high risk of stagflation the question will arise of where are the potential alternative markets. Overall, the Indo-Pacific region remains one of the most promising areas for several reasons.

To start with, this region presents excellent market potential. The past decade witnessed a rapidly expanding consumer market. The total household consumption in India and ASEAN reached 65% and 52%, surpassing the world average of 23% (Figure 6). A recent Maersk white paper indicates that consumption has contributed to 50% of intra-Asian exports since 2019. The e-commerce market, in particular, stands out. It has grown fourfold in the past three years and is expected to reach USD 300 billion by 2025, according to Maersk's analysis.

The expansion is likely to continue. According to the World Bank, the growth of private consumption in the Indo-Pacific area in following years will be far above the rest regions (Table 1). Meanwhile, the fact that India and Southeast Asia are widely regarded as the ideal manufacturing alternatives to China also provides in itself a compelling reason to serve these markets. 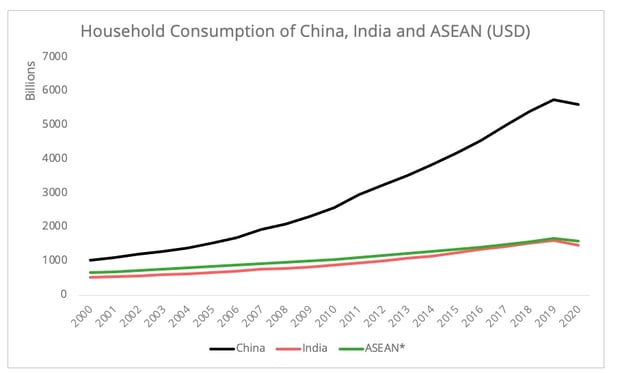 Furthermore, greater Asia market access is widely envisaged thanks to regional and bilateral trade institutions, such as the Comprehensive and Progressive Agreement for Transpacific Partnership and the Regional Comprehensive Economic Partnership. The Biden Administration has also launched the Indo-Pacific Economic Framework (IPEF) to re-engage in the Asian economy. For European companies exporting to this area, the EU's bilateral agreements with various Asian counterparts also granted them advantages in engaging in these markets. For instance, Vietnamese imports from the EU increased by 24% one year after the EU-Vietnam Free Trade Agreement entered into force in July 2020. Dynamic EU exports to Vietnam were primarily generated from computers and electronic components. Furthermore, the revival of the EU FTA negotiation with multiple Asian partners, including India and Indonesia, is expected to foster a more animated EU engagement in the Asian market.

However, we must be aware that the Asian market is tightly linked to the Chinese economy (Figure 7), primarily due to the dependence on Chinese raw materials and intermediate goods. For instance, according to the S&P Global ASEAN PMI in May, despite remaining in expansion, ASEAN business has recorded its second-lowest performance in the past eight months as well as a slower rise in new orders. Chinese lockdown was among the factors behind the weaker growth in ASEAN manufacturing activities. The curbed economic performance will inevitably affect employment, restricting local consumers’ purchase capacity.

IPEF can be perceived as a US response to address such issues through the development of an alternative economic cluster to the Chinese model. However, the IPEF is by no means a conventional trade agreement. In the absence of better US market access being granted to Asian countries whilst addressing touchy issues such as corruption, IPEF could be less appealing to many Asian participants. Consequently, the question remains as to whether this agreement can bring tangible results that show the US engagement in the Asian market or if it is mostly symbolic. 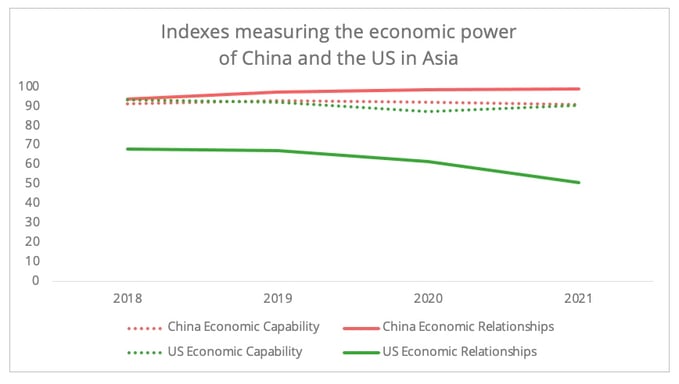 [2] When the index is below 50, it suggests the activities are in contraction.

[8] The data of ASEAN here includes only eight ASEAN members due to the lack of data for Laos and Myanmar.

[9] For detailed explanations and illustrations of the index, please check this link. The higher the value, the more power the referred country has.