The success of China-Europe rail freight raises the question of its subsidy policy. In 2022, an adjustment seems more likely than an outright end to subsidies.

Rail freight between China and Europe continued to flourish in 2021. Such is the success of the service that there is continuing speculation on an end to the Chinese government’s subsidy on the rail freight rate. Rumours about the termination of the subsidy in 2022 have been in the media for years [1]. However, the continuing logistical upheaval and China's policy aimed at developing the rail freight sector also lends credence to another hypothesis: a postponement of the end of subsidies, with some adjustments. In this article, we will examine both scenarios.

In line with the 27% increase in the China-EU trade (Figure 1) China Railway Express (CRE), the official name of the rail freight connection between China and Europe, continues its strong performance. 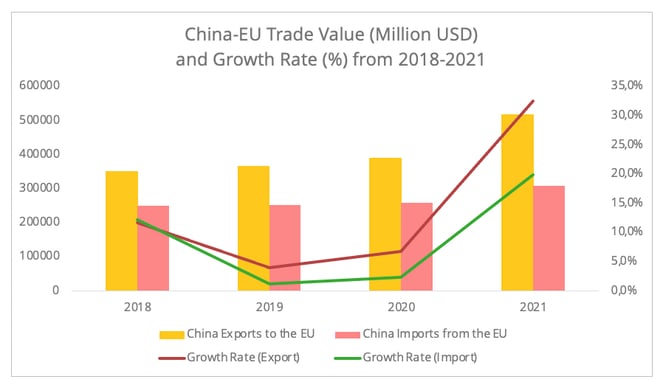 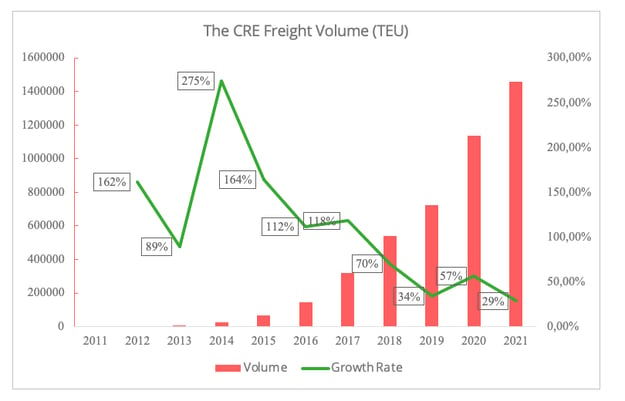 The continuing strong performance for rail freight between China and Europe revives a long-standing topic: the question of subsidies. Can the CRE continue to attract demand if subsidies end? There are multiple parameters at play.

Scenario One: Removal of the Subsidy

The subsidy is sometimes seen as having played a vital role in the nascent phase by attracting shippers to use rail freight service. However, the surge in demand for rail freight during the pandemic shows that its rate is not the only factor influencing the demand. Fewer disruptions in operations and the shorter transit time of rail freight were also factors, especially in the early stages of the pandemic.

One major direct repercussion of subsidy removal would certainly be a reconfiguration of the structure for shipping goods. According to a local government document issued in 2020, the pre-pandemic subsidies in some Chinese cities were fixed so as to match ocean freight rates [3]. Therefore, the increase in rail freight shipping costs linked to the subsidy removal could push out some of the low value-added products that cannot bear a higher price. Low value-added goods still account for a significant share in the CRE’s traffic [4].

While the end to subsidies may lead to a certain drop in demand, it does not necessarily mean stagnation in the development of rail freight for the Europe-Asia connection. For instance, the Shanghai-Hamburg route launched in 2021 is reported to be a zero-subsidy lane. The strategic location, and the proximity to the high-tech manufacturing activities, make it by nature an attractive option for products that are suited to rail freight.

In a hypothetical post-subsidy scenario, a sustainable growth for rail freight on the China-Europe trade lane relies on the capability to attract high value-added goods and the state of rail freight infrastructure. For the former, the current development of Chinese regulations for rail freight shipping seems to lag behind the booming demand in this sector. For example, there are regulations that prohibit goods such as lithium batteries and electric vehicles from being transported by rail. The prospect of infrastructure improvement seems more promising. Both Chinese and European sides are actively engaging in rail infrastructure investment. However, the bottlenecks cannot be resolved overnight.

Furthermore, even if the subsidies were to be removed, they could be compensated with other types of financial incentives. For example, instead of a direct deduction of freight rate, it could be replaced with other formats such as tax benefits [5] to serve as a de-facto subsidy, to alleviate the possibly severe impact on the rail freight sector. Media have reported that some local authorities have already resorted to this approach to strike a balance between applying the policy of phasing out subsidies and attracting shippers by offering them competitive rates.

The continuity of subsidy provision in the CRE operation now appears to be the most likely scenario in 2022, for several reasons.

Firstly, the Chinese government may consider postponing the subsidy removal to mitigate the possible disruption to trade, especially since the CRE has been labelled by the Chinese government as the backbone of trade. Despite the rebound of Chinese trade in 2021 (Figure 1), the political tension with the EU and the US, nearshoring trends, and tight energy supply mean that Chinese trade performance has a rocky road ahead.

Secondly, improving rail freight capacity remains one critical goal of Chinese transportation policy. The subsidy can be seen as a handy tool to protect the sector, while persistent bottlenecks on this route are reported to have diverted some shippers back to ocean freight.

Assuming that the end of subsidies is postponed, the subsidy policy will not necessarily remain strictly the same. Let's look at possible changes.

Subsidies could be targeted at priority actions. In the case of China's EV subsidies, for example, the more gradual phase-out was applied to new energy logistics vehicles and battery swap EVs, two prioritized subfields of China's EV policy. Following this logic, we present here some highlighted priorities for the CRE, based on China's 14th Five-Year Modern Comprehensive Transportation System Plan released in November 2021.

By 2025, China aims to raise the share of eastbound block trains in all China-Europe rail freight to 45%, up from 43.8% in 2020. The asymmetry between eastbound and westbound block trains is a standing issue (Figure 4) and one of the key reasons behind the congestion at border-crossings requiring gauge change.

The removal of subsidies on eastbound traffic could temporarily exacerbate the discrepancy of shipping demand between the eastbound and westbound rail freight. Especially for commodities such as wood and related products, whose demand would be hit by the increased freight rate, as this sector alone accounts for around 10% of the Eastbound shipping goods [7] (TEU). 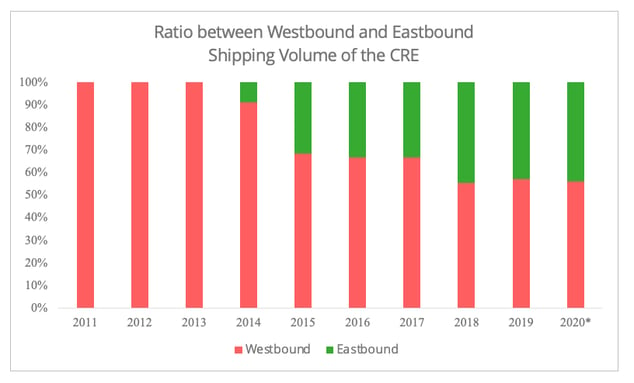 Apart from the China-Europe rail freight connection, the multimodal routes between China and Southeast Asia should also be backed by various policy decisions. This is in line with the newly effective RCEP and the Chinese policy interest to tighten the trade connection with ASEAN.

The subsidy policy signals a continued political engagement in the China-Europe rail freight. In 2022, we may anticipate a growing political influence on the rail freight sector.

One factor is geopolitical tension along the route. In 2021, geopolitical tensions, such as the Poland-Belarus and the China-Lithuania tensions, have created significant unpredictability for Asia-Europe rail freight shipping. Right at the start of the new year political unrest in Kazakhstan also posed concerns over rail freight operations, especially considering that in 2021 over 80% of the rail cargo on the CRE went via the border crossings between China and Kazakhstan (Figure 5).

However, the political context can also stimulate demand. For example, climate issues are driving governments to become more involved in the rail freight sector. For example, in September 2021, the French government published the rail freight recovery plan, which aims to double the modal share of rail in freight transport to 18% by 2030. In addition to an investment component, this plan perpetuates an annual aid of 170 million euros until 2024 for the operation of rail services. Central and Eastern European countries are also keen to improve rail freight infrastructure to provide alternative border crossings to those in Poland and Belarus. Increasing commitment means more opportunities, but also more competition. While 2021 was officially declared the "European Year of Rail", 2022 could see the advent of concrete projects.

[1] It is a widely reported that the timeline for ending the subsidy would be for 2022. However, this information cannot be traced back to any open Chinese official documents.

[3] The specific amount of subsidy provision varies according to the routes. Based on this document, the subsidy for the line between Suzhou (China) and Germany was 3000 USD per Container in 2019. Overall, the issuance of subsidy is a two-level decision-making process. The central government issues the general subsidy policy, including the proportion of the subsidy, its purpose, and the schedule of subsidy removal. Local governments are the actors to implement the policy, decide the specific format of subsidy to be issued. The policy implementation can also sometime decouple from the central government in certain circumstances.

[5] The information is generated based on open Chinese media reports on this topic.

[8] China stopped providing the Eastbound and Westbound data in 2019. 2020’s data is an estimation based on the share of eastbound cargos in 2020 stated in the fourteenth five-year plan of comprehensive transportation planning.