Rising transport prices driven by soaring fuel prices, increasing operating costs, and a sharp slowdown in demand at the end of the year in a context of high inflation: a look back at an eventful year 2022 for the road freight transport sector.

The moment has come to devote some time for the traditional exercise of the year's assessment. Once again, the past year was an unprecedented one, as nobody had predicted the way 2022 would play out. Let us try to summarise in 8 key points the movements that have shaped the evolution of road freight transport in Europe.

The economic recovery that began in 2021 continued in the first half of 2022, leading to a positive development in volumes for road freight transport. But growth then began to slow, as inflation gained ground. Inherited from the 1970s, the concept of "stagflation" (a portemanteau of stagnation and inflation) has been a recurring theme in the discourse of economists in the characterisation of this year 2022 on a global scale.

Both the IMF and the World Bank point to the impact of the disastrous succession of negative factors. Since 2020, one crisis has followed another. The coronavirus pandemic triggered what was expected to be temporary inflation, which in turn was exacerbated by the conflict between Russia and Ukraine, creating a new economic crisis in an already fragile context. "Global economic activity is experiencing a broad-based and sharper-than-expected slowdown, with inflation higher than seen in several decades," stressed the IMF last October, in the latest update of its economic forecasts.

Stagflation poses a serious threat to economies as it strikes hard at the pillars on which they rest or attempt to rest: full employment and price stability. To varying degrees, national macroeconomic policies therefore seek to reduce inflation while helping the most vulnerable households and businesses to cope with the energy crisis. The German €200 billion plan is an illustration of this, even if it brings into question European solidarity. The European Central Bank has raised its key interest rates and will probably continue to do so to fight inflation.

The price to pay for this “forced slowdown” is high. According to IMF forecasts, two euro-zone countries, Germany and Italy, will not escape the recession in 2023.

The explosion in fuel costs is undoubtedly the main difficulty faced by European road freight transport in 2022. The impact of inflation has led to higher diesel prices, and the invasion of Ukraine, followed by restrictions on the supply of oil and gas to European countries, has increased pressure on prices.

In France, according to the latest CNR survey on road freight transport costs, in 2022, the increase in the full cost price of heavy goods vehicles operating in road freight transport averaged 18.5% for a vehicle running on diesel fuel and 43.3% for a vehicle running on natural gas (CNG or LNG). The weight of the fuel cost item is decisive. On an annual average, commercial diesel increased by 45.7% in 2022 compared to 2021 (+52.8% excluding VAT) while NGV saw an increase of 127.5% at the end of September.

All European countries are being affected by this energy cost inflation. In France, according to CNR data, the cost of driving staff is still the number one expense item ahead of fuel in 2022 for a long-distance diesel-powered vehicle. But this hierarchy should be reversed in 2023, and for LNG vehicles, this is already the case in 2022. 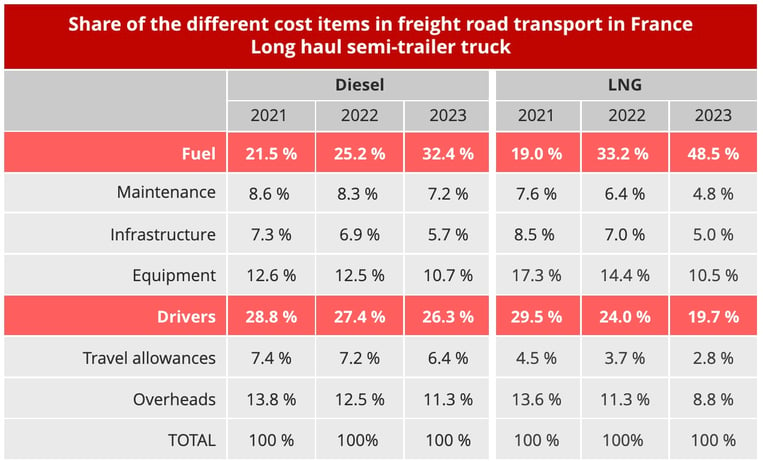 Inflation has strongly impacted the purchasing power of households, favouring wage demands. As a mirror of the employers' protest, the trade union organisations organised strikes either locally as in the United Kingdom at GXO, or at Breger in Laval in France or nationally.

Truck drivers are now in a strong position to negotiate wage increases due to an ever-worsening shortage of labour. The phenomenon also extends to other key functions of transport companies: operating managers are also missing from the roster. The scarcity of skilled workers and the competition between companies to retain or find new drivers are driving up wages.

In France, on an annual average, the salary costs of driving staff (salaries + expenses, excluding travel allowances) increased by 7.7% for the long distance sector and 7.5% for the regional sector in 2022, compared to 2021, notes the CNR. In 2023, they are expected to climb by 12.7% and 12.6% respectively.

In Germany, the minimum wage rose from €9.82/hour to €10.45 on 1 July and €12 on 1 October, an increase of +22%. German Social Democratic Chancellor Olaf Scholz has thus fulfilled one of his main electoral promises and this should have a knock-on effect, even if drivers already earn more than €12/hour for the vast majority.

4/ The evolution of transport prices

In 2022, road transport prices rose across Europe, accompanying the staggering rise in diesel fuel. The latest UPPLY / IRU / TI White Paper reveals that in Q3 2022, transport prices were on average 19.6% higher than in Q3 2021. Such an increase is exceptional and has not been observed for decades.

However, the increase slowed in the third quarter of 2022 due to the decrease in transport demand. There is every reason to believe that prices in Europe have peaked and have now begun to drop, as in the case of French transport. This puts an end to this staggering episode of price spikes in 2022 that has seen some shippers who are very susceptible to the rise in prices knocked onto the ropes, without, however, benefiting carriers who had the hardest of jobs passing on stratospheric fuel prices. 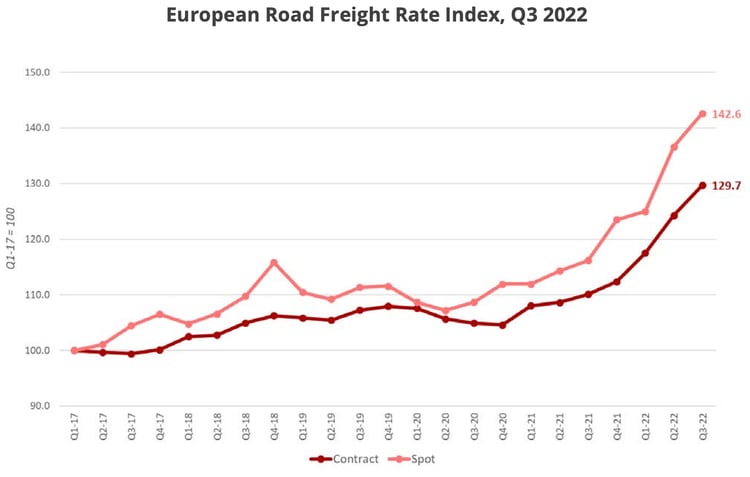 Historically a major supplier of road transport flows in Europe, the automotive industry has been struggling since the Covid 19 pandemic. For the year 2022, European production is expected to have fallen by 0.5% according to S&P Global Mobility.

Europe has been hit hard by the shortage of semiconductors, which has penalised supply. But at the end of 2022, demand is also beginning to crumble. In Germany, the largest market in Europe, sales are expected to fall by 5% this year.

One small consolation: during the pandemic, transport had found itself a new champion: e-commerce. As cross-border e-commerce (purchasing in a country other than that of delivery) accounts for 40% of purchases, it is a strong provider of flows for international transport. But this driving force is also starting to weaken.

Nevertheless, this corresponds to a slowdown in progression. Furthermore, there is no doubt that these forecasts will not be met: inflation, energy prices and uncertainty about the future have come to "break the momentum" by reducing purchasing power and consumer confidence. The world of transport could not help but notice the weakening of its new growth relay.

Drastic increases in fuel prices have led to protests by transport companies in many countries. Everywhere, companies are fighting for their survival.

The protests were particularly fierce in Spain. In March, 20 days of strikes caused serious supply problems throughout the country. A new strike took place in November. The carriers wanted to denounce the passivity of the Ministry of Transport in the face of the increase in their costs but also in the control and enforcement of the law. But the mobilisation did not have the success hoped for by its organisers, and the action was quickly interrupted.

Across Europe, professional organisations have entered the fray. The UETR (European Road Hauliers Association) has called on the authorities of all countries to take "urgent and far-reaching measures to counter the sharp rise in fuel prices". The German organisation BGL has “demanded” from the authorities a significant temporary decrease in diesel/LNG/CNG prices as well as weekly (instead of monthly) updates of the price indices of the Federal Statistical Office, so that the mechanisms for passing on changes in fuel prices can fulfil their role. It also called for shorter payment periods for customers in order to improve the financial liquidity of transport companies threatened by insolvency.

In an interview with the German newspaper Verkehrs Rundschau, Elvis AG points to the decline in transport demand and warns of the imminent crisis and recession. The association also advises freight forwarders and carriers to reconsider long-term investment decisions, if possible to postpone them, and to increase the flexibility of their capacity as a matter of urgency.

Number 1 in Europe ahead of Germany, Spain, France and Italy, the Polish-flagged companies are facing difficult times. In March, Jan Buczek, chairman of the ZMPD, the Polish employers' union of international hauliers (3,200 companies, 100,000 vehicles and 150,000 employees) wrote to the Polish Prime Minister, Mateusz Morawiecki, alerting him to the disastrous situation of the Polish international road transport industry, which is now considered "on the brink".

Just as the United States did following the Great Depression of 1929, Poland wanted to revive its economy with a "New Deal", in response to the Covid-19 pandemic. To this end, the Polish government has implemented ambitious and numerous reforms aimed at profoundly changing Polish taxation. However, the ZDMP believes that, contrary to the announcements, this desire to instate order has led to organisationnel chaos and uncertainty regarding the application of unclear and incomprehensible regulatory provisions. As the rules on driver remuneration in Poland have changed, this has led to an increase in taxes and social security contributions. On average, wage costs would have increased by 30%.

These measures were implemented in conjunction with those of the European Mobility Package. The obligation to return the vehicle to its base every 8 weeks, the limitation of cabotage and the new provisions on the posting of workers have made operations more complex and have increased costs.

Finally, the war between Russia and Ukraine has particularly affected Poland. In addition to the explosion in fuel costs, the conflict has had the effect of depriving the road transport industry of Ukrainian drivers and complicating visa renewal for Belarusian drivers. However, in Poland, nearly 30% of drivers working in international transport are foreign nationals, the majority of these drivers are Ukrainian (about 75%) and Belarusian (about 20%), noted the IRU in the Upply/Ti/IRU report of the first quarter 2022. The second impact is the reduction or even loss of East-bound transport markets. As a result of embargoes and restrictions at customs posts, the number of trips has fallen considerably, reducing the turnover of international transport companies by the same amount.

Poland therefore fears a wave of bankruptcies at the end of this year. In 2022, the turnover of Polish transport companies increased as it did everywhere else in Europe. However, according to Paweł Trębicki, Managing Director of Rhenus Freight Logistics, this increase is due solely to the indexation of fuel prices and not to an increase in the number of shipments. “We are entering a period of weaker market dynamics with a very high cost base.”

8/ Consolidation of the market

In this global context, the gradual consolidation of the road transport market is a major trend: medium-sized and large companies are developing to the detriment of micro-enterprises, as low-margin activity is subject to strong competitive pressure. 2022 was a very good vintage for mergers and acquisitions, driven in particular by investment funds.

Major groups are also participants in this reorganisation of the market. In 2022, CMA CGM took over Gefco. Geodis, for its part, made a very significant acquisition in Poland, with the buyout of Pekaes. Finally, according to Reuters, a major operation is undoubtedly on the tables: that of the sale of Schenker by Deutsche Bahn. The scope of this company goes well beyond road transport, but it is clear that given its weight in this sector in Europe, a possible materialisation of the takeover will have a significant impact.