The year 2022 will mark the beginning of a cycle of slowing global growth, after the strong rebound recorded in 2021. International trade in goods is expected to see its growth decline from 10.8% in 2021 to 4.7% in 2022, and transport prices are expected to be persistently higher.

In 2021, the global economy rebounded strongly, after experiencing the deepest recession in 150 years the previous year. According to the latest estimates from the World Bank, global gross domestic product increased by 5.5%, after a 4.3% fall in 2020, proving the most optimistic forecasters right. Consumer demand was there, despite the persistence of the Covid-19 epidemic, with its waves and variants punctuating activity.

A sharp slowdown in growth

According to economists, this stage is now coming to an end. “The global economy is entering a pronounced slowdown amid fresh threats from COVID-19 variants and a rise in inflation, debt, and income inequality that could endanger the recovery in emerging and developing economies” announces the World Bank in its latest economic forecast.

"Global growth is expected to decelerate markedly from 5.5 percent in 2021 to 4.1 percent in 2022 and 3.2 percent in 2023 as pent-up demand dissipates and as fiscal and monetary support is unwound across the world", the World Bank said. The International Monetary Fund is more optimistic in its forecasts, with growth estimated at +4.9% for 2022. Between the two, the Organisation for Economic Co-operation and Development (OECD) sees an increase of 4.5% in 2022, "with the world coping better with the pandemic and monetary and fiscal policies remaining generally supportive throughout 2022". 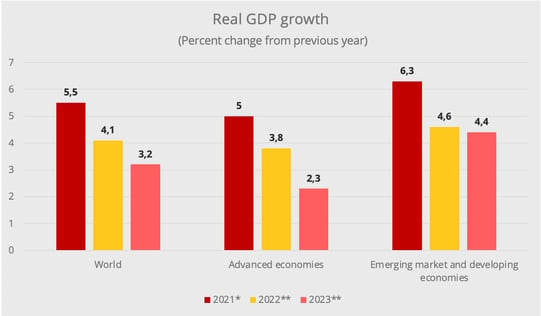 As in 2021, emerging markets and developing economies (EMDEs) will continue to grow faster than advanced economies, increasing by 4.6%. But the gap is narrowing since it is only 0.8 points, against 1.3 points in 2021. In addition, it is should be noted there are strong disparities within this EMDE category. "By 2023, all advanced economies will have achieved a full output recovery; yet output in emerging and developing economies will remain 4 percent below its pre-pandemic trend. For many vulnerable economies, the setback is even larger: output of fragile and conflict-affected economies will be 7.5 percent below its pre-pandemic trend, and output of small island states will be 8.5 percent below." the World Bank said. 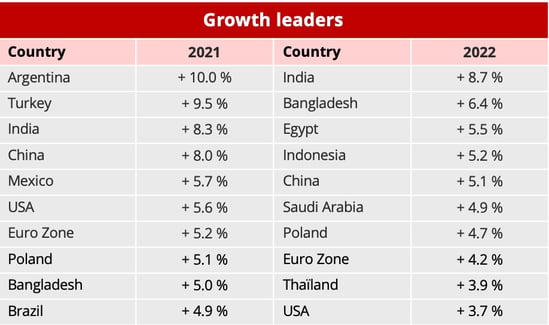 In 2021, Argentina led the field in terms of growth, but we can see this as a pure catch-up effect since its GDP had plunged by 9.9% the previous year. The same goes for India, which rebounded 8.3% after a 7.3% drop. On the other hand, Turkey and China stand out, as these two countries have managed to record strong growth, after being among the few economies to remain in the black in 2020 (+2.2% in China and +1.8 % in Turkey). This is also the case for Bangladesh, whose GDP growth remained in positive territory in 2020 (+3.5%), before growing by 5% in 2021. This country should continue its momentum in 2022, according to forecasts by the World Bank, since it will be in the top three in terms of percentage of growth, flanked by India and Egypt.

The major economies of China, the United States and the Euro Zone remain in the Top 10 for growth, despite a fairly marked slowdown.

An uneven recovery in world trade

The OECD forecasts trade growth of 5% in 2022 and 4.5% in 2023. “This implies that trade will also reach, and then exceed its projected path prior to the pandemic by the end of 2022”, specifies the OECD. Regarding more specifically trade in goods, the World Trade Organization announces an increase of 4.7% in 2022.

These figures point to a deceleration in the recovery. In 2021, after the collapse caused by the pandemic the previous year, world trade has rebounded strongly since growth is estimated at 9.3% by the OECD. The World Trade Organization even revised its forecast upwards last October, with volume growth estimated at 10.8% for 2021 (instead of the 8% announced in March).

However, this V-shaped recovery masks, yet again, significant geographical disparities. “Trade has been a critical tool in combatting the pandemic, and this strong growth underscores how important trade will be in underpinning the global economic recovery. But inequitable access to vaccines is exacerbating economic divergence across regions.

In 2021, the recovery has notably benefited exports from Asia, and in particular from China, but the pace is expected to slow considerably in 2022. Imports also saw double-digit growth in almost all regions of the world in 2021. The major consumer markets of the United States and Europe are expected to see further significant growth in 2022.

From the start of the pandemic, States have been mobilised to support the economy through massive aid. This policy has shown its effectiveness as the recovery, although uneven, has been rapid. But it has also led to overheating which pushes a certain number of decisive indicators into the danger zone for players in international trade. The strong demand has primarily generated a shortage of inputs, and in particular of semiconductors, which is having a very severe impact on certain sectors such as the automotive industry. Faced with both a recovery, the scale of which had been underestimated, and chaos in production, the supply chain came to a standstill on certain routes. American ports are experiencing serious congestion phenomena.

Furthermore, the explosion in demand generated an increase in transport prices which took on unprecedented proportions.

This is all the more true as the support measures put in place by governments will be gradually phased out. Since March 2020, these measures have protected businesses. However, in a study published last October, the credit insurance specialist Euler Hermes estimates that business failures, across all activities, will increase by 15% in 2022, after a decline of 6% in 2021 and 12% in 2020.

It is time for the first evaluations

Slowdown in recovery, persistent inflation, increase in transport costs, congestion of supply chains: at the dawn of 2022, the challenges awaiting supply chain professionals are numerous, and visibility is low.

According to the WTO, COVID-19 continues to pose the greatest threat to trade prospects, as the recovery could easily be undermined by new waves of infection. The arrival of the Omicron variant at the end of 2021 provided a striking demonstration of this by generating new restrictions.

The 2022 edition of the Risk Barometer published by the insurer Allianz shows, however, that in a survey of its customers, brokers, and the industry's professional organisations, the pandemic now only comes in 4th place among their concerns. Disruption to businesses, including supply chain turmoil, which were at the top of the risks cited in 2021, still feature prominently but are overtaken by cyber risk. Environmental issues are also making a remarkable breakthrough, with the risks of natural disasters and risks linked to climate change each moving up three places in the list of major concerns. Finally, the subject of talent shortage made a spectacular comeback and thus entered the Top 10. 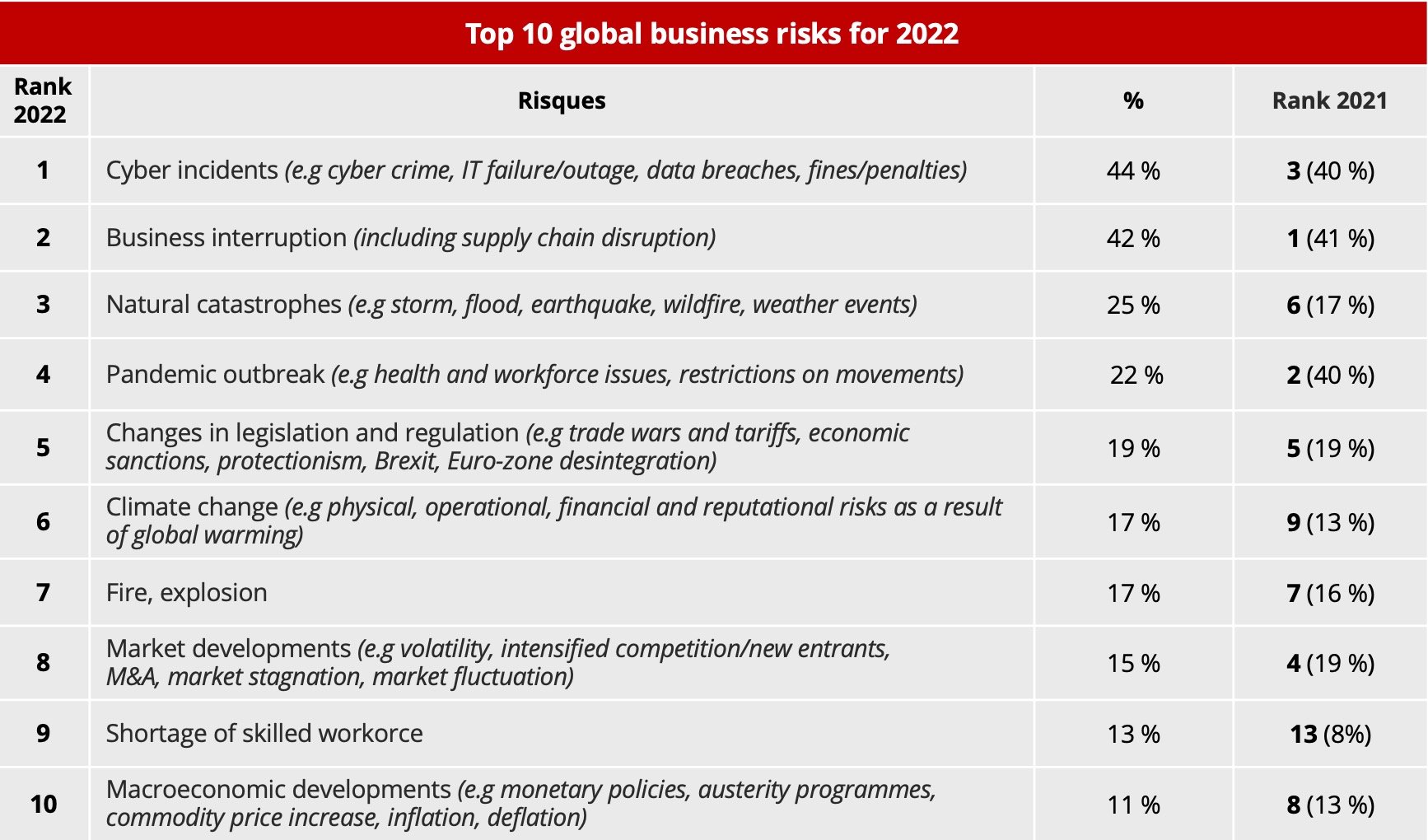 We can see from studying these different issues, to what extent the Supply Chain function, which must of course anticipate risks as much as possible and make contingency plans, is at the heart of all the issues. Until now, however, the voices of its representatives were not always sufficiently heard within companies. On this point too, the Covid-19 pandemic, by showing that the unthinkable was possible, will leave lasting marks.

After the emergency reaction phase to the pandemic shock, 2022 will mark the moment when economies begin to think about the supply chain of tomorrow. “The Covid-19 pandemic has laid bare weaknesses and vulnerabilities in global supply chains It has increased calls for making global value chains (GVCs) more robust and resilient, and reducing the dependence on East and Southeast Asia”, notes a BNP Paribas study published in December 2021.

Governments in Europe and the United States have taken on board the theme of strategic independence and robustness of the supply chain. But companies are also taking action. They will “step up initiatives to make their supply chains more secure by improving the information, not only on first-tier suppliers but on suppliers at all levels, in order to identify bottlenecks at all stages of production. Moreover, recovery plans will be reviewed, and some redundancy will be created in supply chains to have backup capacity. These changes come at a cost, which can be viewed as insurance costs against supply disruptions.” says the BNP Paribas study.

Another major issue, as demonstrated by the Allianz barometer: the environmental concerns. “In the coming years GVCs might also evolve to respond to the tightening of environmental standards required to limit CO2 emissions. This will encourage the development of shorter supply chains. The introduction of a Carbon Border Adjustment Mechanism as considered by the EU will also discourage industries from moving to regions with looser environmental standards.

Undoubtedly, the challenges facing the supply chain in 2022 will also integrate the reflection on the attractiveness of the sector. Accelerated, here too, by the pandemic, the shortage of labour is a tangible reality which has also contributed to fuelling the phenomena of congestion. Technological innovation and digitalisation are necessary, albeit insufficient, responses.The massive investments in infrastructure and in the reindustrialisation of Western economies are likely to come to an end if the question of human resources is underestimated.