PACA: a strategic role for the Mediterranean-Rhône-Saône corridor

DOSSIER. Upply resumes its “Tour de France of Road Freight Transport” by taking a detailed look at the Provence-Alpes-Côte-d'Azur region (PACA). Mediterranean crossroads, the site of France's largest port, PACA can count on several sectors such as aeronautics, pharma, chemicals, electronics, or agri-food to feed the logistics and transport sector.

At the height of the coronavirus crisis, we took a break from our Tour de France of road freight transport. This crisis is far from over, and it will leave its mark. However, economic life is picking up again and we have also decided to restart our panoramas which highlight each region along with its logistics and road freight transport actors. After the Hauts-de-France, Grand Est, Bourgogne Franche-Comté and Auvergne Rhône-Alpes regions, we now arrive in Provence-Alpes-Côte d'Azur.

Unlike many French regions, Provence-Alpes-Côte d'Azur did not experience any modification of its borders or amalgamation during the territorial reform of 2015. On the other hand, it was officially renamed Région Sud, following a vote by the regional council, though still remains widely known by the acronym PACA. Known worldwide for its tourist spots, it also hosts industrial, commercial and service activities around two structuring routes: an East-West route along the coast and a North-South route along the Rhone corridor. These characteristics are reflected in the population distribution. The three coastal departments are home to 80% of the inhabitants: the Bouches-du-Rhône leads with around 2 million people, followed by the Alpes-Maritimes (1.08 million) and the Var (1.05 million). In addition to its population base of 5 million inhabitants, the region can count on its interesting geostrategic position, close to the Auvergne-Rhône-Alpes region, 2nd most important region in France in terms of GDP, but also in proximity to Catalonia and Lombardy, the most important regions of Spain and Italy respectively in these terms. PACA also benefits from an extensive and multimodal transport infrastructure network. In addition, "the region is located at the heart of two euro freight corridors: corridor No. 2 North Sea-Mediterranean (Marseille-Rotterdam) and corridor No. 6 Mediterranean (Madrid-Kiev), which has been completed by the Marseille-Genoa section since June 2018", underlines a study published in January 2019 by the Marseille Agglomeration Urban Planning Agency (AGAM).

According to this same study, "the total traffic flows for the region (including hydrocarbons, rail figures are estimated) represent approximately 280 million tons annually", including 104 Mt for the region's internal flow and 31.6 Mt for transit flow. For these two categories, road transport remains the dominant mode. Finally, the flow of trade is evaluated at 44.3 Mt for domestic and 90.3 Mt for international.

A driving role for the Grand Port Maritime de Marseille

Logistics therefore occupies a very significant role in the regional economy with 116,000 employees, or 7.3% of regional employment. The transport and auxiliary activities sector itself employs 50,153 people, which represents an increase of 3.3% between 2017 and 2018. "The Bouches-du-Rhône department comprises 51% of these employees, Vaucluse 16%, Var and the Alpes Maritimes each 14%, Hautes-Alpes 3% and Alpes de Haute-Provence 2% of the workforce", details the 2018 report from the PACA branch of the OPTL.

The 5,000 or so establishments listed in PACA by the OPTL in the logistics and freight transport sector are mainly located on the Rhone corridor and along the Mediterranean coast. Les Bouches-du-Rhône benefits from a major pole of attraction: the "Grand Port Maritime de Marseille" (GPMM). "The department is located south of the French logistics backbone of Lille - Paris - Lyon - Marseille and has established itself as a first-rate entry point for the European market. Its importance is embodied by the sustained development of its stock of logistics real estate. The outlying area around Fos in this way constitutes one of the main structuring logistics poles of a territory located in the heart of a hinterland with 13 million consumers within a radius of 300 km. In this context, the port of Marseille-Fos has established itself as a first-rate interlocutor and a privileged partner for all the actors of the logistics market", says Hervé Martel, the president of the executive board of GPMM, in an interview published in July 2019 in the "Journal des Transports", a publication of the Regional Observatory of Transport (ORT). Attractive for logistical activities, the port is also an asset for those wishing to establish production sites. The Japanese tractor manufacturer Kubota highlights the proximity of the port to illustrate the choice of its installation in Cavaillon. It is also an important tool for the ITER program, the logistics of which are provided by the Daher group.

Further east, the Var also brings together "significant port activities on the Brégaillon site, as well as mass distribution and courier logistics in dedicated activity areas", details the CCI. In the Alpes-Maritimes, the industrial park of Carros-Le Broc is the largest in the department. It hosts a number of flagships in various sectors: Virbac veterinary products, Arkopharma laboratories and also Malongo coffees.

As part of the government's strategy to strengthen the French port and logistics system, a mission dedicated to the development of the Mediterranean-Rhône-Saône corridor was set up at the request of the Prime Minister. "My objective is to build a strategy with the private and public actors of the four regions concerned by this corridor: Auvergne-Rhône-Alpes, Bourgogne-Franche-Comté, Occitanie and Provence-Alpes-Côte-d'Azur", specifies Jean-Christophe Baudoin, the inter-ministerial delegate in charge of this mission, in the "Journal des Transports" of the PACA ORT.

Vaucluse, on the other hand, attracts land-based logistical activities "due to the high density of the highway network and the central purchasing and warehousing activities", specifies a study published in October 2019 by the Chamber of Commerce and Industry.

The logistical appeal has not worn off yet, as confirmed by the CCI study: "The demand for warehouses is accelerating and is reflected in the creation and extension of the ZAEs (Economic Activity Zones) hosting large logistics platforms: Fos-Distriport (Port-Saint-Louis-du-Rhône); La Feuillane (Fos-sur-Mer), Clésud (Grans-Miramas), Les Bréguières (Les Arcs-sur-Argens), Le Plan Entraigues (Entraigues-sur-la-Sorgue)".

The zones in Fos Distriport and La Feuillane, which emerged in the 2000s, are located near the container terminals of Fos-sur-Mer. “At the heart of the Euro-Mediterranean market, these two logistics areas are specialized in bonded storage and distribution through Europe by truck, train or river barge. Each year, major accounts invest in the port of Marseille-Fos to set up their South European hub,” points out the port of Marseille-Fos. Among those on the shipper's client list are companies such as Carrefour, Castorama, Ceva, Danone, Decathlon, Havaianas, Ikea, Intermarché, Maisons du Monde, Mattel, System U and Weldom, as well as transport and logistics leaders such as Bolloré Logistics, GCA, Geodis, ID logistics, DB Schenker, to name but a few.

The other platforms have a more “continental” logistical profile. Clésud, developed in the 90s, boasts a position "at the crossroads of the Mediterranean arc and Northern Europe, halfway between Barcelona and Genoa. Also in Bouches-du-Rhône, the Bois de Leuze platform, in Saint-Martin de Crau, between Arles and Salon-de-Provence, is home to Distrimag, a logistics subsidiary of Castorama, and the Belgian logistician Katoen Natie (which has notably Decathlon as a client). A little further north, Le Plan Entraigues, in the Vaucluse, benefits from the proximity of the Avignon-Carpentras route and the “Avignon Nord” interchange of the A7 highway. An extension project is currently underway: the memorandum of understanding was signed in 2019 by Le Grand Avignon, the town of Entraigues-sur-la-Sorgue and the company GSE. Finally, in the Var, the Dracénie agglomeration community has also taken up the logistics challenge with the setting up of the Parc des Bréguières in the east of the department. Developed by the Barjane group, the site is home to an ID Logistics/Carrefour platform and a Lidl platform.

To complete its logistics offer, the PACA region also has an important airport in the freight sector, that of Marseille-Provence, 4th biggest French provincial airport with nearly 60,000 tons of air freight processed in 2019, according to figures from the Union of Airports of France. Apart from express traffic, the platform capitalizes in particular on trade with the Mediterranean, Africa and the Indian Ocean in the general cargo sector. Nice ranks as the 7th largest airport in France with air freight traffic of around 15,000 tonnes.

"However, my conviction is that supply chains could be more efficient, generate more value in the service of the region's economy and that of its territories, while protecting social and environmental concerns," says regional prefect, Pierre Dartout, in the ORT Transport Journal. Regional logistics workshops, involving actors from both public and private sectors, were set up in July 2018 to "forge pragmatic solutions".

An important consumer area and a Mediterranean crossroads, the PACA region also relies on a fairly diverse fabric of production. First of all, it benefits from the establishment of global players in the industries of defence and civil security, aeronautics and space which has made this branch the largest industrial sector in the region. The ecosystem is structured around major contractors such as Airbus Helicopters or Thales Alenia Space, which also attracts a vast network of small and medium-sized subcontractors.

The region also stands out in the Chemistry and Materials sector, historically established in PACA throughout the value chain (basic chemicals, intermediate and specialty chemicals, consumer chemicals and downstream user sectors. The main hubs are situated in Marseille-Aubagne, Cannes-Antibes and Nice.

The concentration of high-tech industries along the Rhône Valley also spreads to the PACA region with a major electronic card manufacturing hub in Aix-en-Provence, and also in the health sector, mainly in Alpes-Maritimes. Pharmaceutical exports have soared over the past three years.

The PACA region is also an important hub for agriculture and agri-food. The departments of Bouches-du-Rhône and Vaucluse make up for 64% of employment in the agri-food sector. To which we can also add the wine making presence in the Var.

Finally, an important cosmetics sector has developed, particularly due to the agricultural production dedicated to perfume, aromatic and medicinal plants. Brands such as Fragonard or L’Occitane proudly boast being born in this area. 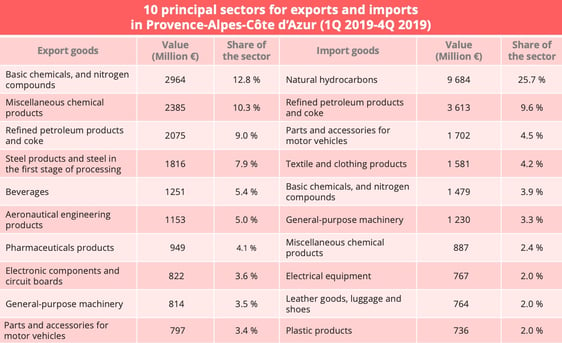 The Mediterranean countries occupy a prominent place among the PACA region's partner countries, with 5 of them in the Top 10 for exports and 4 in imports. Of course, France's traditional trading partners, such as Germany, the United States and China (for imports) are also included in this ranking. Another particularity to note, linked to the weight carried by the oil sector: the weight of Algeria, Kazakhstan and Nigeria as importers. 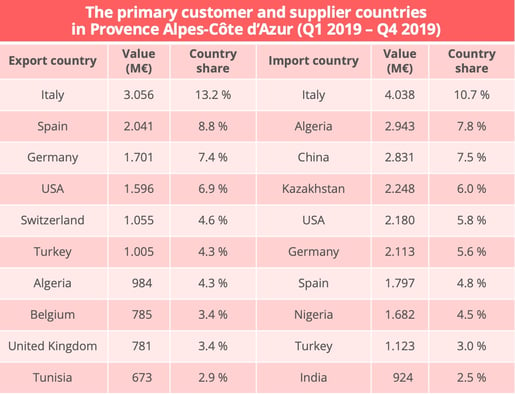 The Provence-Alpes-Côte d'Azur region in numbers